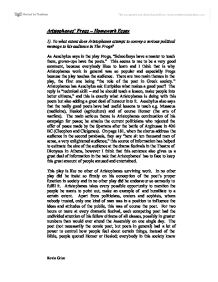 To what extent does Aristophanes attempt to convey a serious political message to his audience in The Frogs?

Aristophanes' Frogs - Homework Essay 1). To what extent does Aristophanes attempt to convey a serious political message to his audience in The Frogs? As Aeschylus says in the play Frogs, "Schoolboys have a master to teach them, grown-ups have the poets." This seems to me to be a very good comment, because everybody likes to learn and I think that is why Aristophanes work in general was so popular and especially Frogs because the play teaches the audience. There are two main themes in the play, the first one being "the role of the poet in Greek society." Aristophanes has Aeschylus ask Euripides what makes a good poet? The reply is "technical skill - and he should teach a lesson, make people into better citizens," and this is exactly what Aristophanes is doing with this poem but also adding a great deal of humour into it. Aeschylus also says that the really good poets have had useful lessons to teach e.g. Musaeus (medicine), Hesiod (agriculture) and of course Homer (the arts of warfare). ...read more.

For two hours or more at every dramatic festival, each competing poet had the undivided attention of his fellow citizens of all classes, possibly in greater numbers than would ever attend the Assembly on one single day. The poet (not necessarily the comic poet, but poets in general) had a lot of power to control how people feel about certain things, instead of the Bible, people quoted Homer or Hesiod; everybody in this society knew passages from the great poets by heart and had themselves been taught morality by their aid. Aristophanes is not simply saying to his audience in this play, "Let us forget all about war and politics for a brief space and indulge in a harmless bit of laughter." He is saying something more like, "The city is in great danger, unless we can find advisers who are both wise and good, we shall perish. We have listened to our orators and our politicians, but their advice has been neither wise nor good, and we have been led to the brink of disaster. ...read more.

Archedemus was a demagogue who had persuaded the Assembly to vote for the execution of the naval commanders after the Battle of Arginusae in 406 BC, so this is a good example of Aristophanes using comedy in his plays to influence and convey his own views into a serious political message for his audience. The Chorus insult him by claiming that "his parentage is doubtful and he isn't on the books," basically meaning that he is a metic and isn't eligible to have Athenian citizenship. This was a common way of insulting someone who was a political enemy because everybody would be laughing at them, this therefore would totally undermine any respect that the audience had for them. The same type of joke is used on page 181, when it is claimed that Cleophon was also not entitled to Athenian citizenship. In conclusion, Aristophanes is very successful in conveying a serious political message to his audience in The Frogs. However his main method of doing this is by ridiculing and making people look bad and illegitimate. This is obviously a very successful poem and personally I believe that it is the best out of all of Aristophanes surviving poems. Kevin Grice ...read more.