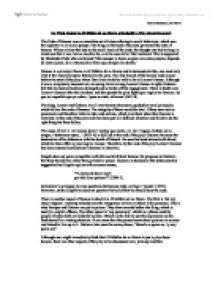 To What Extent Is El M&amp;eacute;dico de su Honra principally a Play about Honour?

To What Extent Is El M�dico de su Honra principally a Play about Honour? The Code of Honour was an unwritten set of rules referring to social behaviour, which was the regulator in all social groups. The King, as the head of society, governed the code of honour. Wilson claims that due to the social basis of the code, the thought one had to keep in mind was that it was 'not so much to be, as to be seen to be' that mattered. This is supported by Men�ndez Pidal who exclaimed 'Mas aunque la honra se gana con actos propios, depende de actos ajenos, de la estimaci�n y fama que otorgan los dem�s.' Honour is a principal theme in El M�dico de su Honra and to demonstrate this, one need only look at the many examples featured in the play. The first breach of the honour code occurs before the start of the play, when Don Arias visits his wife to be at Leonor's house. ...read more.

However, unlike Coqu�n he does not question his belief that he should obey the code. There is another aspect of honour looked at in El M�dico de su Honra. The first is 'del rey abajo ninguno', meaning nobody can take vengeance on him or others in his presence. This is why Enrique and Gutierre are put in prison. They draw swords before the King, which is usually a capital offence. The other aspect is 'soy quien soy', which is a phrase used by people of noble birth in Calder�n's plays. Menc�a is the first to use this expression as she finds herself in a testing situation. It can mean that the person knows their position in society and intend to live up to it. Gutierre later uses the same phrase; 'Menc�a es quien es, / y soy quien soy'. Although one might immediately think that El M�dico de su Honra is just a play about honour, there are other aspects of the play to be discussed; love, jealousy and fate. ...read more.

Many incidents occur that all aid in pushing the play towards its conclusion. The first example is before the start of the play when Gutierre sees Arias leaving the house of his betrothed, Leonor. He breaks off their engagement and marries Menc�a. At the beginning of Act 1, Enrique enters the scene as he falls off his horse. This physically fall is a hint at what is to come; the fall from honour of Enrique, by pursuing a married woman. Another clue as to the future of characters is when Pedro hands Enrique his dagger and it cuts the King's hand. The audience, knowing the history of the two half brothers, know that Enrique kills Pedro, but this occurrence also serves to indicate the death of Menc�a. In my mind, El M�dico de su Honra is principally about honour. Although I have mentioned other themes in this essay, they are all linked in some way to honour. Therefore, honour is present in every situation. Each character thinks of honour at some point because it is extremely easy to lose it, as we have seen from Gutierre, who is dishonoured just by the thought that his wife is being dishonest. Claire Blackburn, St Peter's ...read more.