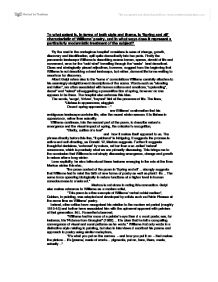 To what extent is, in terms of both style and theme, is 'Spring and all' characteristic of Williams' poetry, and in what ways does it represent a particularly modernistic treatment of the subject?

To what extent is, in terms of both style and theme, is 'Spring and all' characteristic of Williams' poetry, and in what ways does it represent a particularly modernistic treatment of the subject? 'By the road to the contagious hospital' considers issues of change, growth, discovery and identification, split quite dramatically into two parts. Firstly the panoramic landscape Williams is describing seems barren, sparse, devoid of life and movement, save for the "cold wind" travelling through the 'waste' land described. Clues and strategically placed adjectives, however, suggest from the beginning that Williams is not describing a dead landscape, but rather, dormant life forms waiting to resurface for discovery. Albert Gelpi refers also to the 'human' connotations Williams carefully attaches to his seemingly straightforward descriptions of the scene. Words such as "standing and fallen", are often associated with human actions and emotions; "upstanding", dazed" and "naked" all suggesting a personification of spring, however no one appears to be there. The hospital also enforces this idea. The words, 'surge', 'driven', 'beyond' hint at the presence of life. The lines, "Lifeless in appearance, sluggish Dazed spring approaches - " are Williams' confirmation that his ambiguous landscape contains life, after the recent winter season. It is lifeless in appearance, rather than actuality. Williams continues, into the second part of the poem, to describe nature's emergence and the visual impact of spring, the onlooker's recognition, "Clarity, outline of a leaf" and how it makes itself apparent to us. ...read more.

The first sections of the poem mention many colours within the scene - "blue mottled clouds," "muddy fields", "brown with dried leaves", "reddish, purplish". Once the readers are fed a palette of colours, they can but visualise them. Consequently we also visualise what the colours describe literally and their connotations. The 'reddish, purplish' colours have a brutal feel to them, not only in Williams' representation of spring but in the personification I mentioned previously - being colours we might use to describe bruises or b****y wounds. Similarly to drawing your eye into a painting and being led through it, so too are you led through 'Spring and all' by the words. The 'cold wind' is the motion leading the reader through the poem. "By the road" introduces a path to follow. "Beyond, the waste of broad, muddy fields" explains there is more to come and the poem will continue moving. The attention to the world of painting is not the only reason why 'Spring and all' represents a particularly modernistic treatment of the subject, however. Williams takes a contemporary and 'modernistic' stance on the subject of spring. The modernists threw out the romantic conventions of their predecessors and took a more literal and stark approach, seeking to relay what was there, rather than embellish it. This is seen not only in Williams' poetry. ...read more.

Precise description of a truly plausible scene - "patches of standing water", "twiggy stuff of bushes and small trees" illustrates his direct treatment of the subject and the unromantic, initially clinical treatment of spring - typical of the modernists, questioning traditional conventions. Also present, is the clarity and 'truth' - its possibility of being real, without the images being over simplified, "It quickens: clarity, outline of a leaf." Clear rhythmic pattern and structure is also evident. The idea of the words and lines grouped by how they sound together, rather than how they look printed is clearly evident in 'Spring and all', in its seven unequal sections. It has a rhythmic, yet unregulated line structure and no rhyme scheme. Williams himself discussed how unnecessary a rhyme scheme was, "With [Walt] Whitman, I decided rhyme belonged to another age; it didn't matter; it was not important at all." 'Spring and all' is characteristic of Williams' style, approach and theme in its informal discussion and personification of spring. Furthermore, the parallels Williams has drawn between the new growth in the arts and in spring, give it Williams' personal implicit voice and display his ability to use tangibles to describe intangibles. It is a poem describing on one level something visible itself, i.e. spring, and on another level something visible through its products i.e. the changes occurring in the arts, of which 'spring and all' is an example. ...read more.