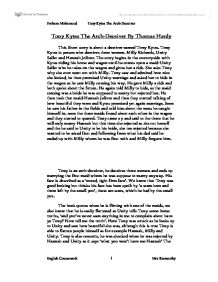 Tony Kytes The Arch-Deceiver By Thomas Hardy This Short story is about a deceiver named Tony Kytes. Tony Kytes is person who deceives three women. Milly Richards, Unity Sallet and Hannah Joliver. The story begins in the countryside with Kytes riding his horse and wagon until he comes upon a maid-Unity Sallet who he takes on the wagon and gives her a ride. She asks Tony why she ever went out with Milly. Tony saw and admired how nice she looked, he then promised Unity marriage and asked her to hide in the wagon as he saw Milly coming his way. He gave Milly a ride and both spoke about the future. He again told Milly to hide, as the maid coming was a bride he was supposed to marry but rejected her. He then took that maid-Hannah Joliver and then they started talking of how beautiful they were and Kytes promised yet again marriage. ...read more.

Tony shows himself as a flirt as he goes, 'that I will darling' and goes on to say, 'you don't suppose I could refuse 'ee?', he spoke this out to Unity Sallet as she was the first maid to come upon Tony. The setting of the story is in the early 19th century, although this is not mentioned in the story we know that it was set then because Tony had the marks of the small pox, which happened in the duration of his time. Another part of the story helps us in the setting as Milly was wearing a feather in her hat and women rarely wear hats except for purpose occasions such as weddings or funerals etc. We have evidence that it was then as it was set in the countryside for one reason and the second was Tony was riding a horse and wagon. This is sufficient evidence to back my work up. ...read more.

This means he is in a bit pf a state (a mess). In the story Tony Kytes The Arch-Deceiver there is quite a bit of humour. The story starts of with humour when he sings rude song in a religious manner. This amuses you as he turns a normal song and sings it like a hymn. The main part of the story is very humorous as when you see that Tony comes pass and decides to give a lift (ride) to his ex-girlfriend and his soon to be wife comes on the scene and he tells Unity to hide in the wagon. He then chats to Milly then she hides as another maid came a person who he rejected for marriage came. This is very funny as three women came upon Tony and two hide. In the end I don't think Tony should have the privilege to take on any of the three maids on for marriage of what he did to Milly but she decided to go back to him. Tony does not really deserve anybody. Farhaan Mahamood Tony Kytes The Arch-Deceiver English Coursework 1 Mrs Kenworthy ...read more.