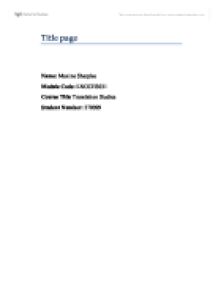 Title page Name: Maxine Sharples Module Code: LNGCH3031 Course Title Translation Studies Student Number: 270099 Contents Page 1. INTRODUCTION TEXT 3 2. METHODOLOGY / PROCEDURES 3ERROR! BOOKMARK NOT DEFINED. 3. FINDING / ANALYSIS 4ERROR! BOOKMARK NOT DEFINED. 3.1. LINGUISTIC PROBLEMS OF TRANSLATION ERROR! BOOKMARK NOT DEFINED.4 3.1.1. TRANSLATION THEORY 6 4. CONCLUSIONS 7 5. REFERENCES / BIBLIOGRAPHY 9 Introduction Text 'Translating is inevitably betraying the original. There is no such a thing as a faithful translation' Translation..... Let us begin by looking at the definition of the word translation. 'the rendering of something into another language or into one's own from another language' (Oxford Dictionary,2000,p. 971) ?? 'to turn from one language into another'(Oxford Chinese Dictionary,2000, p.419) Trans at the beginning of the word translation comes from the Latin prefix, meaning across or beyond. Translation if done correctly should go beyond the afore mentioned definitions. According to Bush (2001) in his book 'Literary Translation practises' states that translation is a subjective activity at the centre of a complex network of social and cultural practises. The imaginative, intellectual and intuitive writing of the translator must not be lost to the disembodied abstraction which is often described as 'translation'. Bush may be agreed with to the extent were, only by fully understand a second language from a political, historical, cultural, social, lexical and a far greater understanding, may we begin to try the task of translation. ...read more.

in his book 'Translation and Language' is the study of language in relation to such things as class, age, regional origin and status. Sociolinguistics takes the translator beyond the realms of language and into real word knowledge. As in the above sentence we see that without sociolinguistics translation would lose its meaning. Egyptian born theorist Mona Baker (1992) goes as far as to say that sociolinguistics is not that helpful. Translation is thought to be a process of conveying the same information expressed in the source language into the target language. However ?? does not exist in another language. It refers to integrity held by yourself, your image of integrity and it can be lost by someone embarrassing you. A literal translation in English would be 'face' but to lose face in English would be meaningless. This situation is repeated in Arabic, a language built on its belief of the Islamic religion. The word Ma shallah translated into English would be something along the lines of, give thanks to god. But of course in Arabic the sheer number of times it said in one day indicates it means a lot more. Therefore arguably language can be used more appropriately with the knowledge of sociolinguistics. One would be foolish to believe that the only function language fulfils is communication. Drama, poetry and semantics are powerful enough to evoke feeling. Language can be used to address someone with respect. ...read more.

Most words we find in the dictionary have multiple meanings. "Only by looking the company a word keeps can we find out which meaning is to be activated in a specific instance ( Fawcett 1997) Take this example in Chinese to illustrate the importance of context and register. The Chinese word kan?represents see, watch, read and look in English. In Chinese this character can be used interchangeably where as in English it cannot. This could lead to obvious translation errors such as "I am looking a movie" ?????. As opposed to im watching a movie. However in the study of Psycholinguistics the relevance theory could contradict Fawcett by suggesting context does not mean the co text or the situation. It is rather a set of assumptions that the listener has about the world. Conclusion. We have looked at translation with the help of linguistic knowledge. We have looked at translation with the help of communicative knowledge to contextualize. We have seen the importance of sociolinguistics and pragmatics in understanding the source language further. However in the case of the ??in Chinese and Ma shallah in Arabic we see, however helpful the knowledge of sociolinguistics, translating can often leave a lot unsaid and render powerful expressions in one culture, meaningless in another. We can conclude that depending on the level of difficulty of the text ie. Poetry being among the highest, the usefulness of phonetics in translating. We can conclude that counties which are geographically close are easier to translate. English and Chinese are culturally and geographically distant, English is Indo-European and Chinese is Sino-Tibetan. ...read more.