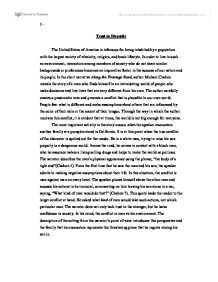 Trust in Diversity The United States of America is infamous for being inhabited by a population with the largest variety of ethnicity, religion, and basic lifestyle. In order to live in such an environment, interaction among members of society who do not share similar backgrounds or preferences becomes an imperative factor in the success of our nation and its people. In the short narrative Along the Frontage Road, author Michael Chabon reveals the story of a man who finds himself in an intimidating world of people who make decisions and live lives that are very different from his own. The author carefully creates a pessimistic tone and presents a conflict that is plausible in our own world. People fear what is different and make assumptions about others that are influenced by the color of their skin or the accent of their tongue. Through the way in which the author resolves this conflict, it is evident that at times, the world is not big enough for everyone. The most important activity in the story occurs when the speaker encounters another family at a pumpkin stand in California. ...read more.

In his mind, the conflict is man vs his environment. The description of the setting from the narrator's point of view introduces this perspective and the family that he encounters represents the threatening place that he regrets raising his son in. The conflict that the main character faces remains, in the end, unresolved. When the two fathers exchange words, they are short and meaningless. He describes the black man's attitude toward him saying, "I was just another pumpkin to him -dumb and lolling amid the straw bales, in the middle of a place that was no place at all" (Chabon 8). This quote, again an assumption made by the narrator, captures the relationship between two men of opposite race, religion, and lifestyle. After their encounter, they continue to be insignificant to each other, just another person to politely ignore. He next describes his own emotion for the man's son saying, "I had abandoned him to a hard fate... But there was nothing that I could have done" (Chabon 8). The speaker sympathizes with the boy and the life that he is going to lead. ...read more.

This opinion proves that the narrator also sees a man vs man conflict, separated by race, with Caucasian being the 'correct' of the two. Lastly, the tone is created through the speaker's mistrust of the world. He feels helpless when his son goes to the hospital and accuses himself of betraying his son into the hands of strangers. In the eyes of the narrator, everyone was a stranger and strangers were untrustworthy, hazardous, and malevolent. To him, the world was full of unavoidable risks, which were caused by those with different backgrounds and ethical judgments. In the end, the issue remains unresolved and the character accepts the world for what it is, not what he thinks it should be. This idea is the basis of the theme of the story. It is undeniable that diversity exists in our world, and fear and mistrust is our natural reaction to what is different. However, in Along the Frontage Road, Chabon expresses the need to accommodate for the diversity that we encounter, make ourselves comfortable in our environment, and accept its people for who they are, not who we think they should be. 1 - ...read more.