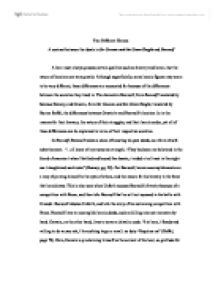 Two Different Heroes: A contrast between the ideals in Sir Gawain and the Green Knight and Beowulf A hero must always possess certain qualities such as bravery and honor, but the nature of heroism can vary greatly. Although superficially, some heroic figures may seem to be very different, these differences are accounted for because of the differences between the societies they lived in. The characters Beowulf, from Beowulf translated by Seamus Heaney, and Gawain, from Sir Gawain and the Green Knight, translated by Burton Raffel, the differences between Gawain's and Beowulf's heroism lie in the reasons for their bravery, the nature of their struggles, and their heroic codes, yet all of these differences can be explained in terms of their respective societies. In Beowulf, Beowulf makes a show of boasting his past deeds, as a form of self-advertisement. "...all knew of my awesome strength. / They had seen me bolstered in the blood of enemies / when I battled and bound five beasts, / raided a troll-nest in the night-sea / slaughtered sea-brutes" (Heaney, pg. ...read more.

"In he came then, the thane's commander, / the arch-warrior, to address Hrothgar: / his courage was proven, his glory was secure. / Grendel's head was hauled by the hair, / dragged across the floor where the people were drinking, / a horror for both queen and company to behold" (Heaney, 113). Beowulf has just killed Grendel's mother, and is bringing back Grendel's head as proof of his victory. Gawain's battle, on the other hand, is more often of a more spiritual nature, such as when he is forced to resist the temptations offered to him by the Green Knight's wife. "And so she tested him, pushed and probed, / Trying to tempt him, pretending love, / And Gawain was so gracefully evasive that he seemed / Always polite, and nothing happened / But happiness. / They laughed and fenced, / And at the end, / Offering a courtly kiss / off she went" (Raffel, pg. 96). The word choice in this passage clearly indicates that Gawain is fighting a battle, but it is an entirely different one from Beowulf's. ...read more.

By Gawain's era, however, the "Greatest of knightly virtues" defined a set of rules that corresponded to how the importance of morality had evolved since the Dark Ages. These two heroes are of a completely different scope, but the differences between them correspond to the differences in their time periods. While their respective societies both value bravery in one form or another, the criteria they set for how bravery is defined are very different. Beowulf defines bravery as a means of achieving fame through battles, whereas Gawain sees it as a more abstract concept, enveloping honor and other "knightly virtues." These differences are a direct cause of the difference in era of the events of these poems. In Beowulf's time, warfare was the only known way of life, which led to achievements in battle being more valued than anything else. By Gawain's era, feudalism had brought around the chivalric way of thinking, which involved doing good for the sake of good, as opposed to doing good for the sake of fame. These differences in thought directly caused the different sets of values that defined a hero. ...read more.