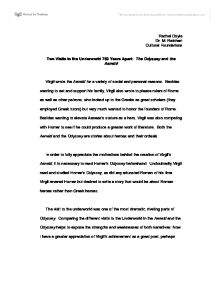 Two Visits to the Underworld 750 Years Apart: The Odyssey and the Aeneid.

Rachel Doyle Dr. M. Reichert Cultural Foundations Two Visits to the Underworld 750 Years Apart: The Odyssey and the Aeneid Virgil wrote the Aeneid for a variety of social and personal reasons. Besides wanting to eat and support his family, Virgil also wrote to please rulers of Rome as well as other patrons, who looked up to the Greeks as great scholars (they employed Greek tutors) but very much wanted to honor the founders of Rome. Besides wanting to elevate Aeneas's stature as a hero, Virgil was also competing with Homer to see if he could produce a greater work of literature. Both the Aeneid and the Odyssey are stories about heroes and their ordeals. In order to fully appreciate the motivations behind the creation of Virgil's Aeneid, it is necessary to read Homer's Odyssey beforehand. Undoubtedly Virgil read and studied Homer's Odyssey, as did any educated Roman of his time. Virgil revered Homer but desired to write a story that would be about Roman heroes rather than Greek heroes. The visit to the underworld was one of the most dramatic, riveting parts of Odyssey. Comparing the different visits to the Underworld in the Aeneid and the Odyssey helps to expose the strengths and weaknesses of both narratives. ...read more.

Homer's Odyssey did not show any difference between how good and bad people in the underworld were treated. Virgil, on the other hand shows part of underworld as a paradise, similar to the Christian concept of Heaven. However, Homer did graphically illustrate the punishments that were handed down to the people who had offended Gods, such Tityos's sufferings. Homer's descriptions elicit pity and horror from the reader or listener. Virgil's version of the underworld was an innovation, and perhaps a reflection of how people's beliefs had evolved. The Aeneid reflects the social thought of that time, that souls are born again after 1,000 years. Like Homer, Virgil holds the belief that life, no matter how hard, is better than death and those who have committed suicide regret their acts. The language in the Aeneid is more poetic, but Homer's achievement as a wordsmith should not be slighted. In the Odyssey, life, no matter how hard, is better than death. The shades are described as "after images of used-up men" and "dimwitted." One compelling section of Homer's says the very hard life of a poor peasant is preferable to the nothingness of death. The Aeneid's action is less dramatic than that of Homer's Odyssey, which contains a very dramatic story of ghosts craving blood. ...read more.

In the Odyssey, Odysseus describes a series of famous beautiful women from history and myth and, following some prodding from his host, describes heroic men. In the Aeneid, there is a similar laundry list except the heroes were Romans. Although Homer's and Virgil's contemporaries may have been riveted by these descriptions, they held much less interest for me, possibly because I am less familiar with the stories. With Odysseus's account, I at least derived some amusement from the thought of Odysseus inventing the account of heroic men to please his host (perhaps he had thought that tales of beautiful women would suffice). After reading these two versions of visits to the underworld, written 750 years apart, with the second one undoubtedly influenced by the first, I feel I have a greater understanding of how people's imagination regarding the afterlife evolved over time. Dante and the Christian writers of the New Testament must have learned from these two works. I also can see the development of literature, with actual words assuming a greater importance than had previously been the case. The drama and storytelling of Homer was and continues to be something that will move us for thousands of years. The poetry of Virgil is more expressive than that of Homer and also will live on, although it may appeal more to intellectuals. 2 ...read more.