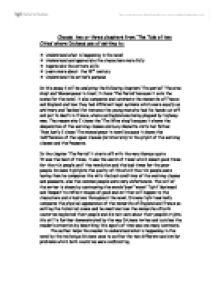 Use of setting in 'The Tale of Two Cities'

Choose two or three chapters from 'The Tale of two Cities' where Dickens use of setting to: * Understand what is happening in the novel * Understand and appreciate the characters more fully * Appreciate the writers skills * Learn more about the 18th century * Understand the writer's purpose In this essay I will be analysing the following chapters 'The period' 'The wine shop' and 'Monseigneur in town'. I chose 'The Period' because it sets the scene for the novel, it also compares and contrasts the monarchs of France and England and how they had different legal systems which were equally as arbitrary and 'lawless' for instance the young man who had his hands cut off and put to death in France, where as England was being plagued by highway men. The reason why I chose the 'The Wine shop' because it shows the desperation of the working classes and Lucy Manette visits her father. Then lastly I chose 'The monseigneur in town' because it shows the indifference of the upper classes (Aristocrats) to the plight of the working classes and the Peasants. ...read more.

The two countries were also show to be equally lawless, consider the 'scarcely amount of protection to justify national boasting. Daring burglaries by armed men and highway robberies' in England. Also the 'sentence of the youth to have is hands cut off, tongue torn out and body burned alive because he had not kneeled down in the rain to do honour to a dirty procession of monks'. This would suggest that France was more barbaric and harsher than England. The events in the American Revolution had as Dickens explained 'strange to relate, have proved more important to human race than any communication yet received'. That there should be no taxation without representation in parliament. Furthermore that the overthrow of the regime was possible. The Americans were ruled once by England, they did not agree with the unfair legal system imposed by the British and the Americans felt that they should govern themselves. In both countries they were complacent that they would be in charge in fact 'that things in general were settled for ever'. In the chapter 'The Wine Shop' begins with a barrel of wine falls and is broken in the street. ...read more.

This was again shown when the marquis knocked down the young boy and killed him. Dickens had thus illustrated the marquis's total indifference. Indeed he did not value the life working classes, the marquis called the working classes dogs and he said ' I would ride over any one o f you willingly, and exterminate you from the earth'. More over Dickens has clearly established the marquis as one of the villains of the plot. The author shows the cruelty of life in 18th century by again pointing out that the populace were hungry. The hunger is a constant theme and helps explain the consequent revolution. Even so they still had pride for instance De Farge throws one the coins back at the Marquis's in his attempt to appease the masses. The writer's purpose was to show the reasons for the revolutions for example the constant hunger of the working classes, and Dickens tells the reader how the monseigneur lived and that he did not care for the people who were in the working classes for example the young boy who got killed. ?? ?? ?? ?? ...read more.