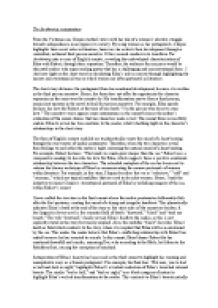 Using Chopin's &quot;The Awakening&quot; as an inspiration for poetry.

﻿The Awakening: commentary From the Victorian era, Chopin startled critics with her tale of a woman?s abortive struggle towards independence in an oppressive society. By using women as her protagonists, Chopin highlights their s****t roles in literature; however she restricts their development through a controlled, authorial third person narrative. It thus seemed conducive to transform The Awakening into a series of English sonnets, revealing the undeveloped characterisation of Edna with Robert, through their separation. Therefore, the audience for my piece would be educated readers who enjoy reading poetry that has a challenging and unconventional form. I shed new light on the short story by elucidating Edna?s role in society through highlighting the narrow and stereotypical way in which women are often portrayed in literature. The short story distances the protagonist from her emotional development, because it is written in the third person narrative. Hence, the form does not offer the opportunity for character expansion in the same way the sonnets do. My transformation moves from a third person, omniscient narrator in the novel to dual first person narrative. ...read more.

Hence, I took the initiative to mimic Chopin?s stereotypical portrayal of Edna by including imagery of the sea, within Robert?s sonnet. I have crafted the structure in the final sonnet where the iambic pentameter deliberately fails after the first quatrain, creating the sound of a dying and irregular heartbeat. This phonetically indicates Edna?s death at the end of the story as the strict rules of the sonnet are broken. A key linguistic device used is the semantic field of death: ?drowned,? ?black? and ?took my breath.? The verb ?drowned,? clearly reveals Edna?s death to the reader, as this is not explicitly stated in the story but merely implied. Also, the modifier ?black? describes Edna?s death as fatal which contrasts to the story, where it is implied that Edna will be re-awakened by the sea. This makes the reader believe that Edna?s conflicting relationship with Robert has ended because she has resorted to suicide. In this sonnet, Edna blames Robert for her emotional downfall and suicide, mirroring Eve, who according to the Bible, led Adam to the forbidden fruit, causing the corruption of mankind. ...read more.

Antithesis has been used in the first line of the final sonnet to demonstrate Edna’s transition from life to death. For example, “the calm, seducing sea turned black with death.” The contrast metaphorically uses the sea, describing the change in nature to indicate Edna’s change. This was successful as English sonnets often refer to love, beauty and nature, thus I endeavoured to include this in the first line to create a dramatic beginning. The conflicting emotions between the two characters stemmed from Robert when he says: “…he can only be the love for thee.” Robert refers to Léonce in the third person, which distances him from Edna and Robert’s relationship; implying that he has realised his mistakes with Edna. The transformation has used the satirical portrayal of the protagonist in The Awakening to highlight the strict gender constraints placed upon the character and in doing so, shedding light on the emotional development of Edna and Robert while they are separated in the short story. The sonnet form has endeavoured to capture a first- hand perspective of the two characters in an attempt to elucidate characterisation in the story. ...read more.