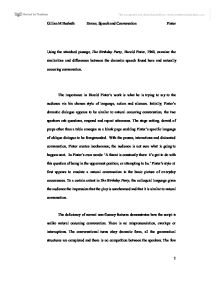 Using the attatched passage, The Birthday Party, Harold Pinter, 1960, examine the similarities and differences between the dramatic speech found here and naturally occurring conversation. The importance in Harold Pinter's work is what he is trying to say to the audience via his chosen style of language, action and silences. Initially, Pinter's dramatic dialogue appears to be similar to natural occurring conversation, the two speakers ask questions, respond and repeat utterances. The stage setting, devoid of props other than a table emerges as a blank page enabling Pinter's specific language of oblique dialogue to be foregrounded. With the pauses, interactions and dislocated conversation, Pinter creates incoherence; the audience is not sure what is going to happen next. In Pinter's own words: 'A threat is constantly there: it's got to do with this question of being in the uppermost position, or attempting to be.' Pinter's style at first appears to emulate a natural conversation in the basic picture of everyday occurrences. To a certain extent in The Birthday Party, the colloquial language gives the audience the impression that the play is unrehearsed and that it is similar to natural conversation. The deficiency of normal non-fluency features demonstrates how the script is unlike natural occurring conversation. There is no mispronunciation, overlaps or interruptions. The conversational turns obey dramatic form, all the grammatical structures are completed and there is no competition between the speakers. The few voiced fillers are placed for a specific reason; Meg's repetitive 'Oh' signifies her inability to understand Petey's utterances, creating time for substantial processing in her attempt to comprehend Petey's information. ...read more.

Her repetition regarding the preparation, presentation and condition of the 'cornflakes' breaks the maxim of quantity. Meg enquires, 'Are they nice?', confirms 'I thought they'd be nice' and later asks again, 'Were they nice?', Meg's repetition, an aspect of real speech is not usually used in drama. Pinter uses this device to highlight the emptiness of the dialogue as a symbol for the emptiness of the character's lives. Although Petey's short responses offer no information; his four replies of 'very nice' indicate a lack of depth of meaning and lack of interest in what Meg has to say, breaking the politeness principle. Meg flouts the maxim of quantity, considering and questioning the whereabouts of Stanley, 'Is Stanley up yet?' 'I don't know', 'I haven't seen him down yet', 'Haven't you seen him down?' and 'He must be still asleep.' Again when Meg questions Petey about the lightness or darkness of the morning, 'but sometimes you go out in the morning and it's dark' suggests a sinister and deceitful situation and that Petey may be acting in a dubious manner. Meg doesn't recognize her own inferences to which Petey responds ambiguously. She takes his responses as his intention to communicate rather than his intention. Meg is only aware of the interior, shown by her positioning behind the serving hatch and darning, implying her inferior status. Petey flouts the maxim of quality, we are not sure that Petey is telling the truth. When Meg asks 'What does it say?' Petey replies. 'Nothing much', keeping information from her. ...read more.

Similarly, 'Lady Mary Splatt', has an expressed meaning with the name, 'Splatt', and an implied meaning; Splatt is onomatopoeic and has connotations of something or someone being battered and or squashed. 'Beach', 'pier', 'dancing' and 'singing' belong to the semantic field of seaside towns and offer a location for the event. This is Pinter's way of establishing an idea, for his audience to infer what might happen at a later point in the play. The statement, 'I'm going to count three!' could also imply that the two men and Petey are interconnected with the play's as yet unknown outcome. Unlike natural conversation, the drama presents two meanings to one set of dialogue. Pinter's style of communicating through ambiguous language broken with silences is often reflective of natural speech yet the premeditated dialogue appears to be designed for a dramatic effect. Pinter's secondary level of meaning is always intended. Pinter uses a breakdown of normal language responses between the two characters' dialogue to show their neuroses or desires. The break-down of relationships are exposed by the disjointed and disconnected, often uncooperative, conversational language. Yet the sentences in the play are always completed, signifying a constructed dialogue. It is obvious that the dialogue is planned, presenting a difference to natural speech, which is generally flooded with interruptions, overlaps and unfinished sentences. Pinter's tightly controlled dialogue is described in Martin Esslin's words, 'every syllable, inflection, the succession of long and short sounds, words, sentences is calculated to nicety.' The analysis demonstrates that the dialogue is clearly constructed for the audience. Pinter's underlying messages are implied with specific meanings and conveyed to the audience by the repetitive pauses and particularly with what is not said. Gillian M Hesketh Drama, Speech and Conversation Pinter 1 ...read more.