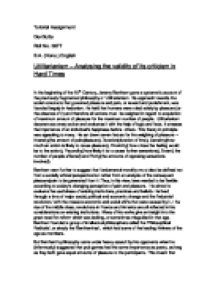 Utilitarianism Analysing the validity of its criticism in Dickens' &quot;Hard Times&quot;.

Tutorial Assignment DevDutta Roll No. 0877 B.A. (Hons.) English Utilitarianism - Analysing the validity of its criticism in Hard Times In the beginning of the 19th Century, Jeremy Bentham gave a systematic account of the previously fragmented philosophy of Utilitarianism. His approach towards the social constructs that governed pleasure and pain, or reward and punishment, was founded largely in hedonism. He held that humans were ruled solely by pleasure (or the absence of it) and therefore all actions must be weighed in regard to acquisition of maximum amount of pleasure for the maximum number of people. Utilitarianism deconstructs every action and evaluates it with the help of logic and facts. It stresses the importance of an individual's happiness before others. This theory in principle was appealing to many. He set down seven factors for the weighing of pleasure - Intensity(the amount of pain/pleasure), Duration(duration of time), Certainty(how much an action is likely to cause pleasure), Proximity( how close the feeling would be to the action), Fecundity( how likely it is to cause further sensations), Extent( the number of people affected) and Purity(the amounts of opposing sensations involved). Bentham went further to suggest that fundamental morality must also be defined not from a socially ethical perspective but rather from an analysis of the consequent pleasure/pain to be generated from it.Thus, in his view, laws needed to be flexible according to society's changing perception of pain and pleasure. ...read more.

Sissy Jupe is another very important character, because she is one of the sole representatives of 'Fancy' or rather, a value system based on emotional judgment, in a town full of Utilitarian dogma. We see that after all events have transpired, Sissy is the one who 'survives' with the ideology she started out. Also, Dickens was very concerned about the welfare of the poor working class people. In his novels, they are always victims of an unfeeling capitalist system which only takes interest in squeezing maximum output for minimum wages. Stephen Blackpool is a classic example of a simple, honest worker who falls victim to the politics of a class division between rich and poor. He is essentially a martyr for the cause of integrity. It is important to note that even the workers' union shows the same selfish attitude as Bounderby. Thus it is not suggested that working class people do not have baser human qualities. Dickens has artfully demonstrated the monstrous nature of a generation that is taught to embrace egoism and to discard emotion. Tom and Bitzer are the pitiful epitomes of Utilitarian upbringing, in Dickens' viewpoint. Tom secretly hates the system he has been forced to swallow, but is ultimately a spineless, selfish man who does not have any moral standing and tricks his own friend and employer. ...read more.

Mill also actively voiced his concern for the apparent disregardof intellectual pleasure that first-generation Utilitarianism advocated. Mill argued that people could only enjoy subtle forms of pleasure if they were given the capacity to do so, through education. Saying that momentary intercourse was better than a long-lasting relationship, because it provided higher pleasure, was wrong on the account that it ignored the intrinsic value of emotional happiness and security brought about by love (not l**t). He said that the 'desirable' in Bentham's philosophy should not be seen as 'what can be desired' but rather 'what ought to be desired', paving the way for intellectual betterment through the guidance of higher rationality. In conclusion, it is the opinion of many critics that Dickens has ably mocked hedonistic ideology, but his criticism does not do justice to the benefits of Utilitarian self-analysis. Also, Bentham wrote some important treatises on social issues, including a call for the emancipation of women, because in his philosophy both men and women deserved equal happiness because there was no significant intellectual disparity between the two sexes. It was only because women were denied education that they could not voice their problems in the public forum. Mill furthered this treatise and made efforts to actualise it, laying grounds for the philosophical backbone of the feminist movement. Merely focusing on hyperbolic flaws of utilitarianism, Dickens' Hard Times unfairly disregards the many finer attributes of Bentham's rationale. ...read more.