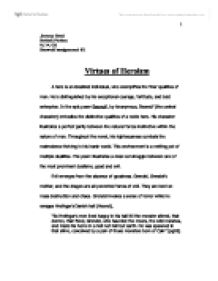 Jeremy Reed British Fiction 9/14/03 Beowulf assignment #2 Virtues of Heroism A hero is an idealized individual, who exemplifies the finer qualities of man. He is distinguished by his exceptional courage, fortitude, and bold enterprise. In the epic poem Beowulf, by Anonymous, Beowulf (the central character) embodies the distinctive qualities of a noble hero. His character illustrates a perfect parity between the natural forces instinctive within the nature of man. Throughout the novel, his righteousness combats the malevolence thriving in his harsh world. This environment is a melting pot of multiple dualities. The poem illustrates a clear-cut struggle between one of the most prominent dualisms, good and evil. Evil emerges from the absence of goodness. Grendel, Grendel's mother, and the dragon are all perverted forces of evil. They are bent on mass destruction and chaos. Grendel invokes a sense of terror while he ravages Hrothgar's Danish hall (Heorot), "So Hrothgar's men lived happy in his hall till the monster stirred, that demon, that fiend, Grendel, who haunted the moors, the wild marshes, and made his home in a hell not hell but earth. He was spawned in that slime, conceived by a pair of those monsters born of Cain" (pg26). ...read more.

As Beowulf travels into the latter years of adulthood, his self-confidence diminishes. This is evident in the fact that he begins to rely on exterior protection. The battles become progressively more difficult: he kills Grendel bare handed; the chain mail saves him from Grendel's mother but he needs a sword to kill her; he uses his sword, armor, and special shield against the dragon but still needs Wiglaf's help. This gradual reliance on armor represents his diminishing physical strength; "His soul sensed how close fate had come, felt something, not fear but knowledge of old age" (pg 98). Even though his physical dexterity trembles among the harsh tempests of battle, his spirituality is his foundation. This is evident in his confrontation with Grendel's mother, "If our father in Heaven had not helped me, Hrunting, Unferth's noble weapon, could do nothing, Nor could I, until the ruler of the world showed me, hanging shining and beautiful on the wall, a mighty old sword-so God gives guidance to those who can find it from no one else. I used the weapon He had offered me, drew it and, when I could, swung it, killed the monstrous hag in her own home" (pg 75). ...read more.

The chastity that is signified through loyalty represents the righteousness of Beowulf's nature. Loyalty finds its ultimate expression in the devotion of goodness through altruism. Altruism is a quest for the greater good within mankind. It is a product of pure spirit driven by love. Love is the comforter of humanity. Love infuses Beowulf's character until it is manifests in his benevolent actions. His lasts words are those that of the quintessential, "For this, this gold, these jewels, I thank our father in heaven, Ruler of the Earth-For all of this, that His grace has given me, Allowed me to bring to my people while breath still came to my lips" (pg109). Through his selflessness, his loyalty to others remains undaunted. Life's journey is one of gradual transformation. It is a resurrection of a spiritual existence from the bleak grave of corporeal reality. Beowulf is a classic hero because the scaffold of his courageous personality is erected by the screws and bolts of spiritualism. Although his bravery and strength surpasses all mortal men, his faith and awe in God transmit messages of brotherhood and friendship. These morals exemplify that which is most virtuous in human character. Beowulf conveys a sense of hope that, as humans, we can climb in order to reach the pinnacle of ideal human nature. 1 ...read more.