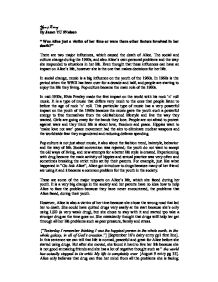 Was Alice just a victim of her time or were there other factors involved in her death?

Year 9 Essay By Jason YU 9Nelson " Was Alice just a victim of her time or were there other factors involved in her death?" There are two major influences, which caused the death of Alice. The social and culture change during the 1960s, and also Alice's own personal problems and the way she responded to situations in her life. Even thought that these influences can have an impact on Alice's life, however she is the one that makes decisions for her life. In social change, music is a big influence on the youth of the 1960s. In 1960s is the period when the WWII has been over for a decade and half, and people are starting to enjoy the life they living. Pop culture became the main role of the 1960s. In mid-1950s, Elvis Presley made the first impact on the world with his rock 'n' roll music. It is a type of music that differs very much to the ones that people listen to before the age of rock 'n' roll. This particular type of music has a very powerful impact on the youth of the 1960s because the music gave the youth such a powerful energy to free themselves from the old-fashioned lifestyle and live the way they wanted. ...read more.

She mistakenly thought that drugs will help her get through all her life problems such as peer pressure, family and stress. ["Yesterday I remember thinking I was the happiest person in the whole earth, in the whole galaxy, in all of God's creation."] [September 16's dairy entry pp1 first line]. In this sentence we can tell that life is normal, peaceful and great for Alice before she started using drugs. But after she moved, she found it hard to live her life because she is not good at making friends and she has a lot of negative thought such as " the world has actually stopped in its orbit. My life is completely over [August 9 entry pg 33]. Alice only believes that drug can free her mind from all the problems she is facing; she thinks that drugs are her last and best resort, but it came at a cost which is too great for her. Alice's family is another problem that she is facing. Her family is not very supportive for her. Her siblings think that she is a stuff-up; they don't even want people to know that they have such a sister. ...read more.

She felt that she became a trader to her friends. Silly things can happen way a person is on drugs because they have no self-control, that how Alice ended on getting locked up in a mental asylum. Alice did not talk about drugs because she felt that no one would have understand her, therefore she took her Gramps sleeping pills and try to forget about it. Alice is a victim of her time with factors such as the pop culture, peace movement and drugs that influenced her. If the society stays the same as before and if pop culture has never existed, the possibility of her taking drug will be very low. However, this is not very likely to occur because history cannot be changed. Alice longed to escape at a cost that too great for her own good. The social change in the 1960s had a huge impact not just on Alice but also on the youth in America. Alice is one of the 50 000 youth that has died because of drugs. By Jason Yu ...read more.