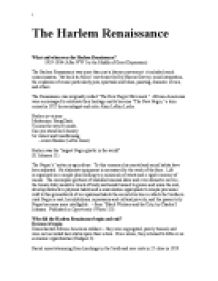 ï»¿The Harlem Renaissance What and when was the Harlem Renaissance? 1919-1934 (After WW I to the Middle of Great Depression) The Harlem Renaissance was more than just a literary movement: it included racial consciousness, "the back to Africa" movement led by Marcus Garvey, racial integration, the explosion of music particularly jazz, spirituals and blues, painting, dramatic revues, and others. The Renaissance was originally called "The New n***o Movement." African-Americans were encouraged to celebrate their heritage and to become "The New n***o," a term coined in 1925 by sociologist and critic Alain LeRoy Locke. Harlem is vicious Modernism. BangClash. Vicious the way it's made, Can you stand such beauty. So violent and transforming. --Amiri Baraka (LeRoi Jones) Harlem was the “largest n***o ghetto in the world” (E. Johnson 11). The n***o’s “métier is agriculture. To this economy his mental and social habits have been adjusted. No elaborate equipment is necessary for the work of the farm. Life is organized on a simple plan looking to a minimum of wants and a rigid economy of means. The incomplex gestures of unskilled manual labor and even domestic service; the broad, dully sensitive touch of body and hands trained to groom and nurse the soil, develop distinctive physical habits and a musculature appropriate to simple processes. Add to this groundwork of occupational habits the social structure in which the Southern rural n***o is cast, his inhibitions, repressions and cultural poverty, and the present city n***o becomes more intelligible. – from “Black Workers and the City, by Charles S. Johnson. Published in Opportunity (Wintz 113). Why did the Harlem Renaissance begin and end? Reasons it begin: Disenchanted African American soldiers – they were segregated, poorly trained, and were not accorded hero status upon their return. Even worse, they returned to little or no economic opportunities (Rodgers 3). Racial unrest stemming from lynchings in the South and race riots in 25 cities in 1919. ...read more.

Although Fire!! was a thought-provoking collection of great works, many African-American critics?predictably and particularly, the Talented Tenth?viewed the effort as decadent and vulgar. Crisis ? W. E. B. DuBois? journal, edited by Jessie Redmon Faucet for some time. Crisis was the official journal of the NAACP. While a highly political journal, Crisis also explored and championed an emerging black intellectual culture: poetry, fiction, and art that reflected the new race consciousness of "The New n***o." Topics included the African American condition, and love, hope, death, racial injustice, and dreams, among others. The Survey Graphic ? (articles and poetry ? big, big names) THE Survey is seeking, month by month and year by year; to follow the subtle traces of race growth and interaction through the shifting outline of social organization and by the flickering light of individual achievement. There are times when these forces that work so slowly and so delicately seem suddenly to flower and we become aware that the curtain has lifted on a new act in the drama of part or all of us. Such, we believe, was the case with Ireland on the threshold of political emancipation, and the New Ireland spoke for itself in our issue of November 1921; with the New Russ which was to some degree interpreted in March 1923; and with the newly awakened Mexico, in May 1924. If The Survey reads the signs aright, such a dramatic flowering of a new racespirit is taking place close at home among American n*****s, and the stage of that new episode is Harlem. --Taken from the March 1925 issue (Volume 6, #6). Opportunity ? The journal of the Urban League of Chicago, launched by Charles S. Johnson after he joined the organization. Opportunity was intended to showcase new black writers and compete with the Crisis. It focused on sociological studies of working and housing conditions in black areas, and discussed African art, Caribbean communities, and all the talented blacks of the time. ...read more.