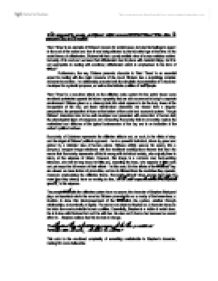 What appeared to you to be Dickens' major concern in 'Hard Times?' How does he present these to the reader?

What appeared to you to be Dickens' major concern in 'Hard Times?' How does he present these to the reader? 'Hard Times' is an example of Dickens' concern for social issues, but also his feelings in regard to the soul of the nation and how it was being affected by the industrial age at the time. In the social theory of utilitarianism, Dickens felt that a purely realistic view of human relations robbed humanity of its soul and we learn that utilitarianism has its place with material things, but it is not appropriate in dealing with emotions; utilitarianism which is emphasised in the form of "Facts." Furthermore, the way Dickens presents character in 'Hard Times' is an essential aspect in dealing with the major concerns of the novel. Dickens has a surprisingly complex character foundation - he deliberately presents both the simplistic characteristics of a character developed for symbolic purposes, as well as the intricate qualities of 'real' people. 'Hard Times' is a one-sided attack on the utilitarian value system for the period based upon emotional proletarian appeals for labour sympathy that are not uncommon in today's corporate environment. Dickens gives us a close-up look into what appears to be the ivory tower of the bourgeoisie of his day; yet ...read more.

Essentially, Stephen is a victim of social class. He is in love with Rachael but can't be with her. He also can't divorce her because he cannot afford to - Stephen realises that it is too late to change. "You had better have been satisfied as you were, and not have got married...." "..Perhaps twice the money... and there's no other law?" This adds to the emotional complexity of something unattainable in Stephen's character, making him more believable. A theme that is recurrent throughout the novel is that of utilitarianism; something that is expressed through fact and character. "Quadruped. Graminivorous. Forty teeth, namely twenty-four grinders, four eye-teeth, and twelve incisors. Sheds its coat in spring..." A perfect example of a product of utilitarian education, Bitzer defines a horse off the top of his head in a split second. Utilitarianism is the assumption that human beings act in a way that highlights their own self-interest. It is based on factuality and leaves little for imagination. Ironically, the chapter that this description comes from is titled, 'Murdering the Innocents.' This proves to be ironic because these utilitarian attitudes, found throughout, are those that are killing the childhoods of the school children and we see that "Fact" comes before "Fancy." ...read more.

This is Dickens's cold, yet realistic portrayal of the damaging effects of utilitarian industrialisation; a place where machinery is more important than the inhabitants. The nature of the people is unsurprising, therefore, at having the collective name of, "Hands," which serves to make Stephen Blackpool more outstanding. In conclusion, the novel that Dickens wrote was intended to provide a clear picture of the society of his day; socio-economic shortcomings - not just to entertain, to show right and wrong. Dickens's characters in the novel are more than just caricatures for an allegorical novel; they are real, thinking, breathing, and feeling people who are driven by impulse, desire and acceptance. Dickens's use of believable characters makes his novel more realistic and therefore more effective. If Dickens had chosen to write his novel using shallow characters, it would have been immediately dismissed as a social commentary. Through these characters Dickens's major concerns can be expressed; major concerns that deal with utilitarian and social issues. "Supposing we were to reverse our arithmetic for material objects, and govern these awful unknown quantities by other means." Utilitarianism has its place with material things, but is not appropriate in dealing with emotions. James Kennedy U6 D ...read more.