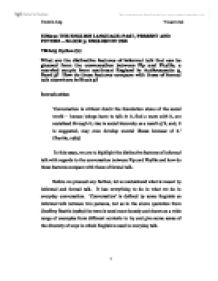 What are the distinctive features of informal talk that can be gleaned from the conversation between Pip and Phyllis, a married couple from southeast England in Audiocassette 3, Band 5?

and 62 (...a leaflet like the one that er...). At times Pip cut-in Phyllis as in lines 11-12: ...the 27th of//Right//April but instead of stopping Phyllis in her track, both collaborated to finish the phrase or what linguists called duetting (T1 lines 13-14). Another case of duetting occurs again in (T1) lines 39-40. In contrast, in the dialogue between members of the interview panel (see Transcript 2 or T2), we noticed that there was a proper and orderly way in which the discussion was conducted. This is quite typical of a formal conversation in an office environment. Within this collaborative process, turn-taking was very evident possibly through the management of a range of linguistic and social cues and signals moderated by the leader or speaker. There was hardly one moment when there was an interruption in the office talk among the interview panel. It was observed that throughout the conversation between Pip and Phyllis' minimal responses like 'yes', 'mm' and 'yeah' was heard at relevant points (T1 lines 5, 13, 24, 35, 37, 48, 53 & 60). In linguistic understanding, the meanings to such responses vary. The 'mm' expressed in (T1) line 5 was interpreted as Phyllis trying to gather her thoughts before Pip cut-in to complete the sentence. ...read more.

Phyllis wanted a confirmation on her comment about the booking of tours being dodgy. No tag questions were noticed in the formal dialogue. A tinge of humour was detected when antonymy was used to describe the receptionists at the hotel. In giving a 'Very Good' grading, Phyllis described the receptionists as "terribly helpful" (T1 line 28). Antonymy is a paradigmatic relationship of opposites as being a pair of words at opposite ends of a continuum. Overall, we noted the collaboration between Pip and Phyllis and noticed their understanding of the imprecise or inexplicit reference in relying on their shared memories of their previous trip to Paris (T1 lines 43-52) and this latest trip (T1 lines 57-65). They gave support to each other, changing views with regard to the British Airways flight (T1 lines 17-22) and negotiating answers for the questionnaire as in the valuation for the hotel room. After all, they have been married for 46 years and have had plenty of practice in conversation with each other, thus explaining the lack of disturbance caused by the frequent interruptions. From the views and comments of the panel of interviewers we assessed that all four are senior executives in the company and all are well versed in IT and human resource matters. ...read more.