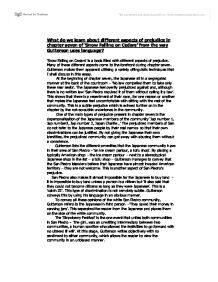 What do we learn about different aspects of prejudice in chapter seven of 'Snow Falling on Cedars' from the way Gutterson uses language?

What do we learn about different aspects of prejudice in chapter seven of 'Snow Falling on Cedars' from the way Gutterson uses language? 'Snow Falling on Cedars' is a book filled with different aspects of prejudice. Many of these different aspects come to the forefront during chapter seven. Gutterson makes them apparent utilising a variety oflinguistic techniques that I shall discuss in this essay. At the beginning of chapter seven, the Japanese sit in a segregated manner at the back of the courtroom - 'No law compelled them to take only these rear seats'. The Japanese feel overtly prejudiced against and, although there is no written law 'San Piedro required it of them without calling it a law'. This shows that there is a resentment of their race, for one reason or another that makes the Japanese feel uncomfortable with sitting with the rest of the community. This is a subtle prejudice which is echoed further on in the chapter by the not-so-subtle undertones in the community. One of the main types of prejudice present in chapter seven is the depersonalisation of the Japanese members of the community 'j*p number 1, j*p number2, j*p number 3, Japan Charlie...' ...read more.

At this stage, Gutterson writes objectively with no sentiment to either community, which allows the reader to view the community in an unbiased manner. Just before the end of this part of the story, Gutterson mentions Pearl Harbour then immediately reverts back to the third person by referring to the Japanese as 'they' once more - 'They were loaded onto a ship'. This symbolises the fact that Pearl Harbour changed everything, forever abolishing any hope of unity within San Piedro. This is particularly important to remember for the rest of the novel. The next part of the chapter is situated in the courtroom. Gutterson writes with a particular sympathy to Hatsue and the Japanese in this section. Hatsue talks about her own feelings of personal turmoil in this section - a sense of division between two different cultures and her guilt at her desire to be American. Gutterson uses Mrs Shigemura to convey the stereotypical Japanese citizen. Her character tries to convince Hatsue to be Japanese despite living in USA. Mrs Shigemura is also prejudiced in a different way - against the white citizens of San Piedro - 'Stay away from white men'. ...read more.

In this way, Gutterson keeps his structure consistent throughout the novel, even if the subject matter differentiates. His use of obvious language conveys obvious prejudice. For example 'The law said that they could not own land unless they became citizens...' On the other hand, Gutterson uses subtle language to convey the quiet undertones of prejudice present in San Piedro 'j*p number 57 dislocated his right hip'. This derogatory depersonalisation of the Japanese in the word 'Japs' is present throughout the novel. Gutterson makes the theme of prejudice evident in chapter seven both through the use of perspective and by using language to convey a particular viewpoint. Gutterson allows language to represent culture. The difference in language used by both groups emphasises the divide between the Japanese and the white citizens in San Piedro. Gutterson uses harsh language when referring to the Japanese from the white perspective so that, despite seemingly seeing life through the white community's eyes, the reader automatically feels sympathy for the Japanese thus becoming biased towards them. It is very important that the reader feels this way in order to appreciate and understand the remaining chapters of 'Snow Falling on Cedars'. Word Count = 1,128 ...read more.