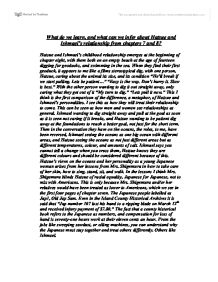 What do we learn, and what can we inferabout Hatsue and Ishmael&amp;#146;s relationship from chapters 7 and 8?

What do we learn, and what can we infer about Hatsue and Ishmael's relationship from chapters 7 and 8? Hatsue and Ishmael's childhood relationship emerges at the beginning of chapter eight, with them both on an empty beach at the age of fourteen digging for geoducks, and swimming in the sea. When they find their first geoduck, it appears to me like a films stereotypical dig, with one person, Hatsue, caring about the animal its size, and its condition "He'll break if we start pulling. Lets be patient..." "Easy is the way. Don't hurry it. Slow is best." With the other person wanting to dig it out straight away, only caring what they get out of it "My turn to dig." "Lets pull it now." This I think is the first comparison of the difference, a metaphor, of Hatsue and Ishmael's personalities. I see this as how they will treat their relationship to come. This can be seen as how men and women see relationships as general. Ishmael wanting to dig straight away and pull at the goal as soon as it is seen not caring if it ...read more.

The Japanese people labelled as Jap1, Old j*p Sam. Even in the Island County Historical Archives it is said that "j*p number 107 lost his hand to a ripping blade on March 12th and received injury payment of $7.80." The fact that a county historical book refers to the Japanese as numbers, and compensation for loss of hand is seventy-one hours work at their eleven cents an hour. From the jobs like sweeping sawdust, or oiling machines, you can understand why the Japanese must stay together and treat others differently. Others like Ishmael. "He had known her for six years and he had not known her. The detached part of her." This statement refers to the fact that Hatsue would not be seen in public with Ishmael. Never to talk to each other in school, only in the secluded woods and beech where no one would see them or on the berry fields where no one would care. Even if Hatsue did not understand this at first she still follows the unwritten laws, not through choice but respect of what her family and what Mrs. ...read more.

It was a kind of relief to rest his cheek on the earth underneath the stars and to have some hope of seeing Hatsue." This short glimpse of Hatsue taking in the washing forced him to return the next five nights though he did not want to "...his walk would become a pilgrimage, he would feel guilt and shame." Only to see her twice more once taking the washing in, another throwing out the kitchen scraps. This stopped the night her father emerged from his house. They then are caught in a storm while both working picking on the same field. Ishmael follows Hatsue to a hole in the roots of a cedar tree thinking he cannot be seen, but Hatsue turns round and plainly invites him in. giving the impression she knew he was following her but never said anything. They talk about their last kiss Ishmael tries to make the peace exclaiming the kiss as wrong, and that he was sorry. Hatsue is embarrassed more than ashamed and not sorry, Ishmael soon jumps to copy what Hatsue wants. They talk for half an hour and then kissed for even longer. Leaving Ishmael at the happiest moment of his life, for now. ...read more.