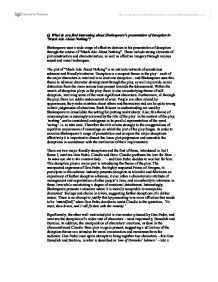 What do you find interesting about Shakespeare's presentation of deception in 'Much Ado About Nothing'?

Q. What do you find interesting about Shakespeare's presentation of deception in 'Much Ado About Nothing'? Shakespeare uses a wide range of effective devices in his presentation of deception through the course of "Much Ado About Nothing". These include strong elements of plot construction and characterisation, as well as effective imagery through various sound and visual techniques. The plot of "Much Ado About Nothing" is an intricate network of scandalous schemes and friendly trickeries. Deception is a rampant theme in the play - each of the major characters is involved in at least one deception - and Shakespeare uses this theme to advance character development through the play, as well as provide comic distraction from the more serious tone present towards the d�nouement. Within the matrix of deception ploys in the play, there is also an underlying theme of self-deception, involving some of the most significant characters. Furthermore, all through the play, there is a subtle undercurrent of error. People are often misled by appearances; they make mistakes about others and themselves and can be quite wrong in their judgements of situations. Such failures in understanding are used by Shakespeare to consolidate the setting for plotting and trickery. Also, this theme of misconception is cunningly mirrored by the title of the play: in the context of the play, 'nothing' can be considered ambiguous in its parallel representation of the word 'noting' i.e. to take note. Therefore the title relates strongly to the exaggerations of repetitive occurrences of misnotings on which the plot of the play hinges. In order to examine Shakespeare's range of presentation and compare the major deceptions effectively it is important to dissect the linear plot progression and assemble the deceptions in accordance with the motivation of their implementers. There are two major friendly deceptions and the first of these, introduced in Act I Scene I, involves Don Pedro, Claudio and Hero. ...read more.

His motivations are clarified in Act II Scene ii as being 'to misuse the Prince, to vex Claudio, to undo Hero and kill Leonato.' The deception is more, as Claudio and Don Pedro are deceived on the theme of Hero's faithfulness as soon as Don John's words have been reinforced by the apparent sight of Hero involved in an encounter with another man. Claudio is again comparatively easily deceived, and his vulnerability and impressionability is again evident in an instant, albeit partial, belief of Don John's denunciation of Hero as 'disloyal' - 'May this be so?' This deception represents an amplified version of Don John's previous plot and is the most significant carried out in the play, with respect to the overall plot; the deception is also crucial in its addition of the uncertainty and action required for the fulfilment of the romantic comedy genre. In similarity with the strong visual nature of Don John's first deception, where the masked party, of which I will later investigate the existence of presentational significance, is used as a strong medium of presentation, this deception also illustrates strong visual imagery. This is especially the case in the effecting of the deception, where Don John can only trick Claudio and Don Pedro into belief of Hero's unfaithfulness by the provision of visual evidence - 'Go but with me tonight, you shall see her chamber-window entered...' Furthermore, it is a paradoxical fact, highlighted in the presentation of the deception, that Don Pedro and Claudio, who are involved in the implementation of most of the deceptions in the play, are relatively effortlessly deceived by the villainous Don John, whereas Benedick is not as easily deceived even when tricked by respectable and revered characters such as Leonato and Don Pedro in the previous scene. Don John's ploy is strongly linked with a third strand of deception in its development. Proposed by the Friar, this plot can be classed as ambiguously motivated and follows a divergent progression. ...read more.

Consequently, Dogberry becomes a means of obstruction to the discovery of truth, promoting wider deception, therefore, through his own self-deception. Even the messenger at the beginning of the play can be counted among the self-deceivers; like Dogberry, he manages to persuade himself that he has to talk in the courtly style of the nobles around him and not in the simple style of someone who has a message to deliver. His excessive efforts to achieve this are highlighted in the reference: 'He hath indeed better bettered expectation that you must expect of me to tell you how.' In actual fact the only character who strikes us as being altogether free of self-deception is the evil Don John, who is a master in the art of deceiving others, in his own right. In conclusion, Shakespeare uses his consistently constructive presentation of deception not just for character and plot development, but also to enlighten his audience towards other more subtle themes in the play. There is a sense of balance in the development of the various deception ploys, especially between Benedick and Beatrice, and also in the presentation of schemes of various motivations. In addition, the words of Balthasar's song in Act II Scene iii are echoed through the course of the play through the male organisation of all the deception plots, and reflects the patriarchal setting of the play. There is also a strong significance in the setting of the play in Italy as this was a region thought in Shakespeare's time to be the natural home for plotting and dishonesty. Furthermore, Shakespeare highlights the fact that, in the same way the characters deceive and manipulate each other, and perhaps in the greatest deception of all, the play, and plays in general, are manipulative of audiences' feelings. Therefore there is an undertone of irony running through the play in the fact that we should laugh at or commiserate with victims of other deceptions, while we, ourselves are being deceived. ...read more.