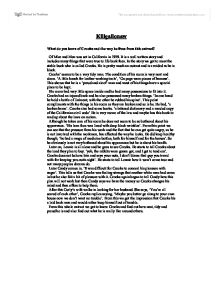 What do you learn of Crooks and the way he lives from this extract?

Killgallonaw What do you learn of Crooks and the way he lives from this extract? Of Mice and Men was set in California in 1939. It is a well written story and includes many things that were true to life back then. In the story we get to meet the stable buck who is called Crooks. He is pretty much an outcast and is avoided as he is black. Crooks' seems to be a very tidy man. The condition of his room is very neat and clean. 'A little bench for leather working tools', 'On pegs were pieces of harness'. This shows that he is a 'proud and aloof' man and most of his things have a special place to be kept. ...read more.

Although he takes care of his room he does not seem to be so bothered about his appearance. 'His lean face was lined with deep black wrinkles'. From this point we can see that the pressure from his work and the fact that he can get quite angry, as he is not involved with the workmen, has affected the way he looks. He did keep healthy though, 'he had a range of medicine bottles, both for himself and for the horses'. So he obviously is not very bothered about his appearance but he is about his health. Later on, Lennie is all alone and he goes to see Crooks. He starts to tell Crooks about the land they plan to buy. ...read more.

This tells us that Crooks was feeling strange that another white man had come in but he also felt a bit of pleasure with it. Crooks again began to tell Candy how this plan will not work but then Candy says we have the money so Crooks changes his mind and then offers to help them. After this Curly's wife walks in looking for her husband. She says, 'You're all scared of each other', Crooks replies saying, 'Maybe you better go along to your own house now we don't want no trouble'. From this we get the impression that Crooks his a laid back man and would rather keep himself out of trouble. From this whole extract we get to know Crooks and find out how neat, tidy and proud he is and also find out what he is really like around others. ...read more.