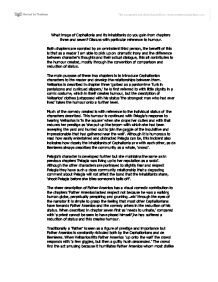 What image of Cephallonia and its inhabitants do you gain from chapters three and seven of &quot;Captain Corelli's Mandolin&quot;? Discuss with particular reference to humour.

What image of Cephallonia and its inhabitants do you gain from chapters three and seven? Discuss with particular reference to humour. Both chapters are narrated by an omniscient third person, the benefit of this is that as a reader I am able to pick up on dramatic irony and the difference between character's thoughts and their actual dialogue, this all contributes to the humour created, mostly through the convention of comparison and reduction of status. The main purpose of these two chapters is to introduce Cephallonian characters to the reader and develop the relationships between them. Velisarios is described in chapter three 'garbed as a pantomime Turk in pantaloons and curlicued slippers,' he is first referred to with little dignity in a comic costume, which in itself creates humour, but the description of Velisarios' clothes juxtaposed with his status 'the strongest man who had ever lived' takes the humour onto a further level. Much of the comedy created is with reference to the individual status of the characters described. ...read more.

When described in chapter seven first as 'needs to urinate,' compared with 'a priest cannot be seen to have p****d himself',he has suffered a reduction of status and this creates humour. Traditionally a 'Father' is seen as a figure of prestige and importance but Father Arsenios is constantly ridiculed both by the Cephallonians and de Bernieres. When Velisarios lifts Father Arsenios 'up onto the wall' the crowd responds with 'a few giggles, but then a guilty hush descended.' The crowd find the act amusing because it humiliates Father Arsenios whom most dislike but continue to feel guilt because they show a sincere lack of respect for the authoritative position Father Arsenios holds, (priest), again the reduction of status is used to create humour. Throughout the novel there are constant references to Alekos's 'goats of Mount Aenos'. The goats on a basic level contribute humour to the novel by possessing such status and being regarded as so significant, but they can also be taken as a metaphor for the importance of Cephallonia in its natural and traditional state in which the goats are a symbol for uniting all Cephallonians within the Cephallonian spirit. ...read more.

Stamatis is used for comic value in chapter seven when asking Dr Iannis 'can you put it back?' referring to the pea extracted from his ear in the first chapter. The comedy is created by Stamatis and Dr Iannis being derogatory towards women 'have you tried beating her?' and later Dr Iannis decides 'you shouldn't beat her anyway, they just find more subversive ways of getting at you.' Family relationships is a very prominent theme running throughout the novel and present in these chapters, again a reflection of traditional undisturbed life. Stamatis is also humorous when he 'snapped the stem of the flower, concealed it within his coat and sauntered away with an exaggeratedly insouciant and casual air.' The comedy works in this incident because of the comparative image between manly Stamatis talking of beating his wife and sensitive Stamatis touched by a flower, supposedly associated with women. The overall image gained, although each character has a developing personal identity, is that there is a very strong feeling of community spirit within Cephallonia where all the natural beauty and native people will stand together to preserve the traditional life style of Cephallonia. ...read more.