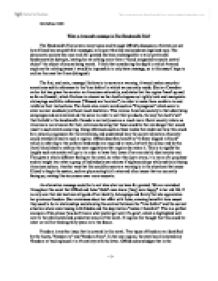 What is Atwood's message in The Handmaid's Tale?

What is Atwood's message in The Handmaid's Tale? The Handmaid's Tale covers many topics and through Offred's discussion of events we see how Gilead has warped bible messages, torn apart families and condones legalized r**e. The democratic society she once took for granted has been exchanged for a strict patriarchal fundamentalist dystopia, leaving her as nothing more than a "cloud congealed around a central object" the object of course being womb. I think that considering the depth in which Atwood explores the relating issues it would be impossible to only have message, so in this essay I hope to outline the ones that I can distinguish. The first, and main, message I believe is to serve as a warning. Atwood makes many but sometimes subtle references to the 'time before' in which we currently reside. She is a Canadian writer but has given the narrator an American nationality, and states that the regime 'hasn't spread as far as Canada', which I believe is relevant as the Aunt's slogans out rightly twist and manipulate old sayings and bible references ("Blessed are the silent") in order to make them conform to and reinforce their instructions. The Aunts also create words such as "Prayvaganza" which seem to enter normal vocabulary without much hesitation. This mimics American society in that advertising campaigns and commercials do the same in order to sell their products, the way the Aunt's 'sell' their beliefs to the handmaid's. ...read more.

The lack of communication and touch over a long period of time, where defiance of this results in a public execution, deeply affects the handmaid's making them find comfort in undetectable rebellion. By this I am referring to the period Offred spent in the red centre, where they would pass messages from bed to bed and could "touch each other's hands across space", the space symbolizing the void in which they are to feel both emotionally and physically resulting from the only human contact to be the obligatory r**e and 'hopefully' conception on which their life depends. This is similar to when Offred would touch Moira's fingers through the hole in the wall during their secret meetings in the toilet. Because of all these events stated in this novel and the way in which they seem to be sandwiched in-between Aunt Lydia's slogans of the 'perfect' handmaid in Gilead, shows that one message being conveyed is that no matter who they are, everyone needs some sort of rebellion against such an oppressive regime. The previous Offred had the message carved onto the cupboard and even the Commander has his outlet for it, meaning that no-one can be completely controlled or dehumanised as aimed for by Gilead. Human nature can't be eradicated, however strict the punishment for it is. An example of this is when Offred takes a huge risk on her life by seeing Nick. ...read more.

This kind of information would only be available to those in power and so would have to be obtained through secret connections, forbidden by the establishment. During the Salvaging, she describes the man they are meant to killing as "one of us" and knocks him out so as to not subject him to a painful death. This incident was used to highlight the lies being told by Gilead, as she points out he had not raped a handmaid as they were told, but was helping handmaid's escape from the state. This gives another side to the way people attempt to break such a system but as the story of Ofglen ends sadly and abruptly it could have been used to show that this method too was risky and could only be left unnoticed for a short period of time. Possibly this type of rebellion would be seen as worse than that adopted by Moira, as although Moira was potentially more dangerous physically, private talk and planning was forbidden in order to stop an organized uprising which was more hazardous to the establishment itself, rather than a few Aunts or Commanders. The message conveyed by this is that when there is such a totalitarian hold over the state, it's hard to beat without succumbing to them one way or another. Feminism plays a large part in this novel, and Atwood creates the character of Offred's mother to take the role of a follower of the feminist movement of the 1970s as a way to convey their views and ideas in a direct fashion. ...read more.