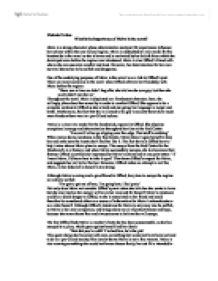 What is the importance of Moira in the novel? Margaret Atwood: The Handmaid's Tale (1986).

Melanie Parkes What is the importance of Moira in the novel? Moira is a strong character whose determination and past life experiences influence her actions within the new Gilead regime. Moira is undoubtedly a role model for the handmaids in the novel as she is brave and is motivated by her beliefs from which she developed even before the regime was introduced. Moira is also Offred's friend with whom she can associate comfort and trust. However, her determination for her own survival shows her to be selfish and dangerous. One of the underlying purposes of Moira in the novel is as a link to Offred's past. There are many occasions in the novel when Offred refers to her friendship with Moira before the regime: 'There was a time we didn't hug after she told me she was gay, but then she said I didn't turn her on' Throughout the novel Moira is displayed as a flamboyant character, here, she willingly jokes about her sexuality in order to comfort Offred. ...read more.

Offred is particularly impressed by Moira's actions and at one point states ' if I were Moira, I'd know how to take it apart' This shows Offred's respect for Moira, and suggests her will to be like her. However, Offred makes no attempt to act like Moira, as her disbelief in herself is too strong. Although Moira is caring and a good friend to Offred, her plans to escape the regime are entirely selfish: 'I've got to get out of here, I'm going bats. I feel panic' Not only does Moira not consider Offred's panic when she tells her she wants to leave but she also implies her escape will be on her own and for herself. Moira's resistance could be a direct danger to Offred, as she is associated as her friend and could therefore be considered either as a source of information for Moira's whereabouts or as a rebel herself. ...read more.

Offred's comfort she takes from Jezebels is maybe that the resistance she has discovered is her escape route. Offred now knows she can be successful without being Moira. So, Moira is a strong-minded politically aware woman. Her beliefs in feminism motivate her to resist the s****t regime she has been forced to comply with. Moira is a constant reminder of past life, as she represents freedom for women in a pre-Gilead and Gilead regime, although the sexism she now fights against is magnified in Gilead. Moira's determination is a contrast to Offred's, and her bravery is something, which all the Handmaids wish they had. Moira's heroine status makes her seem she can help any of them and they perceive her to be successful. However, in reality Moira has become a prostitute in Jezebel's. Moira has become something that symbolises what she has fought against mentally and physically throughout her life. Moira is an example in the novel of failed determination. She shows that Offred's subtle attempts to resist the regime and find others like her are not useless. ...read more.