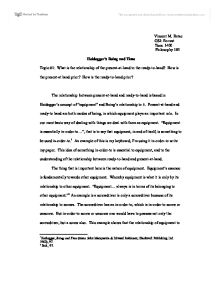 Its conspicuousness would disappear, and the hammer would come into one's awareness. Moreover, the hammer would be brought into the presence of our attention and become present-at-hand. It is this interplay of ready-to-hand to present-at-hand, and vice versa that creates a relationship. The relationship of the two modes becomes apparent then. In one mode, namely the ready-to-hand an object, or piece of equipment, is being utilized as what it is supposed to be used for. Therefore, the ready-to-hand is more of the practical application of an object. Whereas the present-at-hand comes when one is examining, reflecting upon, or brings into theoretical concern a given object. This is important because since the time of Plato, philosophers have privileged the theoretical way we look at the world over the everyday we live in the world. They have privileged the present-at-hand over the ready-to-hand because they either don't see a relationship between the two modes, or don't think that it is important. The relationship is that there are two ways of dealing with the world, practically and theoretically, and that both ways are important, in and of themselves. In addition, these two modes of being are related through Dasein's dealings with the world, in that without these two modes the world would not be intelligible. ...read more.

In a natural state Dasein deals with the world as ready-to-hand in that it sees and uses equipment as what it is for, within a referential totality. When objects present a problem for Dasein, the ready-to-handness of the world changes to present-at-hand. Dasein brings the problem into presence in order to be examined, and thus the present-at-hand. In that way it can be said that the present-at-hand is an abstract view that emerges only when something is presented as a problem to be examined. This being said, present-at-hand is a secondary way of dealing with the world. The primary way is that of ready-to-hand which is how we deal with the world on a day-to-day basis. 1Heidegger, Being and Time (trans. John Macquarrie & Edward Robinson; Blackwell Publishing Ltd. 1962), 97. 2 Ibid., 97. 3 Ibid., 107. 4 Rick Canedo, http://ist-socrates.berkeley.edu/~ricksweb/index_files/technicalterms.htm 5 Manipulation, and manipulability are important because by using a piece of equipment for what it is supposed to be used for, it shows the manipulability of that equipment. "The hammering itself uncovers the specific 'manipulability' of the hammer." This in turn will lead to what Heidegger calls ready-to-hand. 6 Ibid., 98. 7 Ibid., 107. 8 "When its usability is thus discovered, equipment becomes conspicuous." (Being and Time, pg 102) 9 Ibid., pg. 147. 10 Ibid., pg 98. The same concept of the "referential totality" of equipment as it applies to Dasein. 11 Ibid., pg 121. "... ...read more.