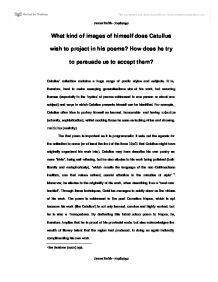 Catullus’ collection contains a huge range of poetic styles and subjects. It is, therefore, hard to make sweeping generalisations about his work, but recurring themes (especially in the ‘cycles’ of poems addressed to one person or about one subject) and ways in which Catullus presents himself can be identified. For example, Catullus often tries to portray himself as learned, honourable and having urbanitas (urbanity, sophistication), whilst mocking those he sees as lacking virtue and showing rusiticitas (rusticity).

The first poem is important as it is programmatic: it sets out the agenda for the collection to come (or at least the first of the three libelli that Catullus might have originally organised his work into). Catullus may here describe his own poetry as mere “trivia”, being self-effacing, but he also alludes to his work being polished (both literally and metaphorically), “which recalls the language of the neo-Callimachean tradition, one that values refined, careful attention to the minutiae of style”[1]. Moreover, he alludes to the originality of his work, when describing it as a “neat new booklet”. Through these techniques, Catullus manages to subtly show us the virtues of his work. The poem is addressed to the poet Cornelius Nepos, which is apt because his work (like Catullus’) is not only learned, concise and highly worked, but he is also a Transpadane. By dedicating this introductory poem to Nepos, he, therefore, implies that he is proud of his provincial roots, but also acknowledges the wealth of literary talent that the region had produced, in doing so again indirectly complimenting his own work.

Poem CXVI, whilst on the surface simply being another Gellius invective (cf. XCI, for example), has connections to poem one (and the main issue of Catullus’ portrayals of himself) as some critics have suggested that it can also be seen as being programmatic (though others, such as Wiseman, have suggested that it is merely a “charmless” and “spurious” later addition to the collection)[2]. When Catullus says that he had planned “to turn for you songs of Battiades”, he is referring to sending Gellius Latin translations of Callimachus; this is reminiscent of poem LXV, in which Catullus again discusses sending Hortalus “songs of Battiades” (which we have as the following poem), this time telling us that it because he lost the creative spark that he would need to produce original poetry when his brother, Quintus, died (though the very fact that he could write poem LXV shows that this cannot be entirely true). It is significant that these two poems are both the first and last of what some scholars believe could have been Catullus’ third libellus (containing the elegiac poems). This “verbal echo stakes out an aesthetic position common to both texts and thereby marks them off as the closely related ‘framing’ pieces regularly found at the end of an Alexandrian poetry book”[3]: ultimately, Catullus is again attempting to associate himself, in the reader’s mind, with the learnedness, artistry and style of Callimachus and Alexandrian poetry in general.

Poem IV is generally taken to be an account of Catullus’ return trip from Bithynia to his hometown of Verona, settling his boat upon nearby lake Garda. The poem can be seen as Catullus simply flaunting his “speediest of ships” (IV.2) and exotic travels, but it is Hellenistic in style and tone, “owing much to the Hellenistic topos exemplified in Callimachus’ epigram on a conch shell”[4]. Catullus portrays himself as being a leisured aristocrat, which links  with ideas of urbanitas, through both the themes of the poem as well as the mythological and geographic allusions; for example, the list of places that his ship is said to have passed in lines 6–9 and the links to Hellenistic dedicatory poetry and Apollonius of Rhodes’ Argonautica. Also, Catullus expects his audience to understand that the Latin he uses to describe his boat (phaselus) does not mean in this context “bean”, but a particular type of yacht: “the poet was appealing to a certain snobisme”[5]. Poem IV, then, seems to epitomise Catullus’ allusive style, concerned with upholding his own social status in a society that was very hierarchical.

Whilst also possibly being Catullus’ most offensive invective, poem XVI is very obviously concerned as greatly as IV with how Catullus wants himself to be seen by those around him. The poem also seems quite paradoxical as, on the face of things, Catullus is declaring his modesty, chastity and goodness by means of a poem which begins, and ends, with the threat pedicabo ego uos et irrumabo. However, he is refuting what Aurelius and Furius see as his effeminacy, and, in Roman society especially, such a show of virility is able to do this. After all, as Catullus himself concludes, “the true poet should be chaste himself, his verses need not be”; in other words, just as simply because he writes about thousands of kisses and grains of sand does not make him effeminate, writing about obscenity does not mean that he is degraded.[6] We must surely take this viewpoint with the subsequent poetry in Catullus’ corpus, so that when, in poem XXXVII, he threatens to “scrawl the Inn’s whole frontage for you with phallic graffiti”, he is simply using it as a poetic device in order to declare his love for Lesbia as being greater than that of her other lovers.

Poem L, on the other hand, returns to portraying Catullus as the leisured aristocrat taking pleasure in trivial pursuits (in this case, writing poetry with his friend Licinius). Of course, whilst not being the explicit theme of the poem, it is easy to see the way in which Catullus indirectly shows his own social superiority. After all, for a Transpadane to display himself writing with Roman poets shows us, where he in reality has or not, that he has now been fully accepted by the Roman literary circle. Poem LIII is similar in that it, comedically, shows not only the urbanitas of “my Calvus” (in terms of his articulacy in prosecuting Vatinius), but the very fact that Catullus has the time to attend court at Rome (and is well acquainted with orators) shows the height of his own social status[7]. On top of that, it shows that Catullus cares about the interests of society and the justice system, therefore displaying his   own pietas.

Catullus was also interested in the politics of his day, despite most commentators agreeing that he does not express any explicit political viewpoints or arguments in his collection. Poem LXXXIV can be seen as one of Catullus’ invectives with comedic intentions, in this case playing on the mispronunciations of a politician, Arrius, from a relatively lowly background: Newman links the theme of the poem to themes in the work of comic writers   such as Aristophanes (for example, “the funny lingo of the foreigner” and “the lisping mispronunciations of Alcibiades”[8]). The poem is obviously designed to humiliate Arrius, and “put him in his place”, which is quite ironic considering that Catullus himself did not come from the highest of backgrounds, being a provincial Transpadane. When, for example, Catullus mentions Arrius’ mother’s “freeborn brother” (84.5), he seems to be implying that his mother herself was not in fact freeborn, but was born a slave. He thus tries to make us think that Arrius, whilst he hoped “that he had spoken most impressively” because his family “all spoke like that”, was simply not up to the job of running the state as his background had seemingly been very deficient preparation for it, let alone being able to pronounce properly the language that he would need to communicate with the Roman people. In doing this, of course, Catullus is raising himself up in status, so that his readers concentrate on Arrius’ lowliness rather than Catullus’ own provincial background.

Poem XXXIX is similar in that Catullus is also trying to portray someone, in this case Egnatius, as being lowly and despicable in order to hold him back. The poem begins as though Catullus is complimenting Egnatius when he describes him as having white shiny teeth and as always grinning (on the other hand, richer people tended to have worse-looking teeth than the poor in Roman times, because of their eating habits, and his constant smiling could show vanity), however, the last line completely removes all doubt as to Catullus’ real feelings when he states that the quality of Egnatius’ teeth simply shows the amount of urine that he has drunk. Having “forgotten the civilised code of urbanitas”, Egnatius “must be a Celtiberian”[9] (or, at least, Catullus concludes not a Roman, and should therefore not be treated as such). With poem XXXVII earlier in the collection, we know that Catullus’ motive for attacking Egnatius is because he has been eloping with Lesbia. Once again, Catullus uses personal invective in order to diminish the status of someone that he dislikes, whilst also often gaining a comedic effect from doing so.

In conclusion, Catullus has tried to portray himself in many ways, all as we would probably expect positive. Running through his collection we can see definite themes: for example, portrayals of Catullus’ own urbanity (though at other times he is proud of his Transpadane status and the prominence of his family in the region), sometimes by reference to others’ lack of it, and his literary style, which is refined, learned and highly worked (which is shown in the vast mythological references of the middle group of “long poems” as well as the conciseness of a large proportion of his other poems. Moreover, Catullus displays himself as a faithful, respectful, honourable lover, which is contrasted against the lax morals of Lesbia’s lovers and, later, Lesbia herself. Ultimately, Catullus’ poetry is very personal, though he of course aimed for it to reach as wide an audience as possible, and we may feel as though we see many sides of his personality within it, but he surely did, after all, only show us what he wanted us to see.

Newman, J.K. (1990). Roman Catullus and the Modification of the Alexandrian Sensibility. Hildesheim.

Wray, D. (2001). Catullus and the Poetics of Roman Manhood. Cambridge.