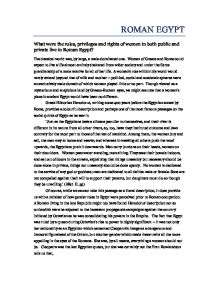 What were the roles, privileges and rights of women in both public and private live in Roman Egypt?

ROMAN EGYPT What were the roles, privileges and rights of women in both public and private live in Roman Egypt? The classical world was, by large, a male-dominated one. Women of Greece and Rome could expect to live a life almost entirely sheltered from wider society and under the fierce guardianship of a male relative for all of her life. A woman's role within this world would rarely extend beyond that of wife and mother - political, social and academic spheres were an exclusively male domain of which women played little or no part. Though viewed as a mysterious and suspicious land by Graeco-Roman eyes, we might assume that a woman's place in ancient Egypt would have been no different. Greek Historian Herodotus, writing some 400 years before the Egyptian annex by Rome, provides a colourful description and perhaps one of the most famous passages on the social quirks of Egypt as he saw it: 'Just as the Egyptians have a climate peculiar to themselves, and their river is different in its nature from all other rivers, so, too, have they instituted customs and laws contrary for the most part to those of the rest of mankind. Among them, the women buy and sell, the men stay at home and weave; and whereas in weaving all others push the woof upwards, the Egyptians push it downwards. Men carry burdens on their heads, women on their shoulders. Women pass water standing, men sitting. They ease their bowels indoors, and eat out of doors in the streets, explaining that things unseemly but necessary should be done alone in private, things not unseemly should be done openly. No woman is dedicated to the service of any god or goddess; men are dedicated to all deities male or female. Sons are not compelled against their will to support their parents, but daughters must do so though they be unwilling.' ...read more.

celebrated, and those who could afford to do so might spend a great deal of money on making a wedding celebration as lavish as possible. In P.Oxy. XLVI 3313 (=Rowlandson 251), Apollonios and Sarapias write to Dionysia regarding her wedding, revealing the lengths they have gone to to have a decorative garland made of narcissus flowers and roses. If formal contracts were written regarding marriage, then we can assume it would be concerning the contents of a dowry. Although dowries had existed long before the Roman occupation of Egypt, their arrival saw a great increase of importance being placed upon them. It was not only money which passed to the groom, but also clothes and jewellery of which their monetary value would be carefully noted. Furthermore, these contracts revealed what would happen to the dowry should the couple divorce. Occasionally, a woman could receive the full dowry back; other times, as we see below, it remains in the possession of the husband: BGU IV 1103 (13 BC) To Protatchos from Zois daughter of Herakleides, with as guardian her brother Eirenaios son of Herakleides, and from Antipatros son of Zenon. Zois and Antipatros agree that they have separated from each other, severing the union which they had formed according to an agreement made through the same tribunal in Hathyr of the current 17th year of Caesar, and Zois acknowledges that she has received from Antipatros by hand from his house clothes to the value of one hundred and twenty drachmas and a pair of gold earrings, which he received as dowry. The marriage agreement shall henceforth be null, and neither Zois nor any other person acting for her shall take preceedings against Antipatros for the collection of the dowry [...] Divorce was by no means uncommon in Roman Egypt - marriages could be terminated quickly and with relative ease: very often, there is no reason given as to why a couple are divorcing, but occasionally it is due to one party's unfaithfulness or violence, or simply that a remarriage is sought. ...read more.

registration documents which reveals that here too, women made it their business to buy and sell property of various forms; slaves, camels, but in particular, houses. She specifies: 'Among the 32 documents recording sales of houses there are 35 women principles compared with 36 men. Among twelve documents recording registration of property, there are eight women property owners and 17 men.' (1983: 314) Using the evidence available which dates over a time span of 200 years, Hobson concludes that one-third of the village real estate was owned by women. She points out, however: 'Given that men's liabilities to liturgy to taxation and liturgy were greater than women's, we might suspect that men put their possessions into their wives' names in order to reduce the size of their own estates... For this reason it is critical to determine whether the role of women is merely a mask for the economic activities of the men in their households, or whether women really did function in their own capacities and in their own financial interests.' (1983: 316) And so, whilst it was general practice throughout the classical societies that it was sons, rather than daughters, who got the largest proportion of a family's inheritance, not all families were fortunate enough to have surviving male heirs and it was always preferable to keep such inheritance within the immediate family. As far as management of their own property is concerned, women were clearly offered considerable, yet conditional, freedom to control and dispose of it as they pleased. Hobson concludes, 'So when we reconsider our statistics from this one small village in light of the broader spectrum of evidence provided by wills from the whole country, we obtain confirmation for the hypothesis that the economic role of women in Roman Egypt was indeed genuine, as far as it went, but that it derived quite literally from the female right to share in the property of her own family by dowry and inheritance, and probably did not extend much beyond that. ...read more.