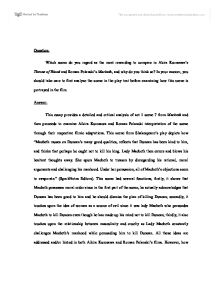 Which scene do you regard as the most rewarding to compare in Akira Kurosawas Throne of Blood and Roman Polanskis Macbeth, and why do you think so? In your answer, you should take care to first analyze the scene in the play text before examining how

Question: Which scene do you regard as the most rewarding to compare in Akira Kurosawa's Throne of Blood and Roman Polanski's Macbeth, and why do you think so? In your answer, you should take care to first analyze the scene in the play text before examining how this scene is portrayed in the film. Answer: This essay provides a detailed and critical analysis of act 1 scene 7 from Macbeth and then proceeds to examine Aikira Kurosawa and Roman Polanski interpretation of the scene through their respective filmic adaptations. This scene from Shakespeare's play depicts how "Macbeth muses on Duncan's many good qualities, reflects that Duncan has been kind to him, and thinks that perhaps he ought not to kill his king. Lady Macbeth then enters and blows his hesitant thoughts away. She spurs Macbeth to treason by disregarding his rational, moral arguments and challenging his manhood. Under her persuasion, all of Macbeth's objections seem to evaporate." (SparkNotes Editors). This scene had several functions; firstly, it shows that Macbeth possesses moral order since in the first part of the scene, he actually acknowledges that Duncan has been good to him and he should dismiss the plan of killing Duncan; secondly, it touches upon the idea of women as a ...read more.

She uses various ways to make Macbeth agree with her. She uses emotional blackmail, coupled with her femininity by saying she will not love him anymore: "From this time such I account thy love." She knows that he loves her deeply and uses this against him. She then insults his masculinity by saying, "Letting 'I dare not' wait upon 'I would' like the poor cat i' the adage?" Here, she is calling him a "wimp" and a "scaredy cat". She totally insulted him by comparing him to the cat that wants the fish but doesn't want to get his paws wet. She uses foul phrases with appalling imagery such as telling Macbeth that while she was breast feeding her baby she would: "while it was smiling in my face, have plucked my n****e from his boneless gums and dashed the brains out, had I so sworn you had done to this." She tries to come over as very menacing and heartless at this point in the play, making a point of the fact that if she had promised to kill her own child she would do so. The role of women at the time when Shakespeare wrote this play was that women were mothers and supported their husbands, their main role would be to look after the home. ...read more.

has absolute trust in him and has given him a high position. Previously, Asaji has planted alot of doubts in Washizu's thoughts about the king and Miki. In this scene, however, Asaji is still able to continue planting bad thoughts into Washizu's head. This film adaptation is in the "noh theater", a form of japanese musical drama. Asaji's face is painted and she acted like she had the noh mask on with her expressionless face. Th noh mask portrays the female character and in this case, also portrays a nonhuman (witch) character, since she is so evil. This scene emphasizes the idea that women are a source of evil and trouble even more than the Polanski's version. In Polanski's version, we still see Lady Macbeth, crying, using her femininity to persuade Macbeth to commit the crime. In Kurosawa's adaptation, we see that Asaji seldom look into the eyes of Washizu and she never shed a tear. She talks with much calm, showing that her words alone are enough to manipulate Washizu. She doesn't even have to resort to using her feminine features to help her. In conclusion, the ideas of moral order, women as a source of evil and the relationship between masculinity and murder are found in the play script and the two film adaptations. ...read more.

This student written piece of work is one of many that can be found in our University Degree Macbeth section.