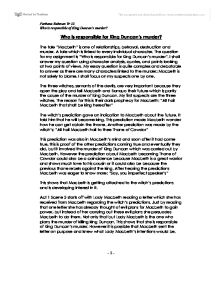 Who is responsible for King Duncan's murder?

Who is responsible for King Duncan's murder? The tale "Macbeth" is one of relationships, betrayal, destruction and murder. A tale which is linked to every individual character. The question for my assignment is "Who is responsible for King Duncan's murder". I shall answer my question using character analysis, quotes, and points looking at two points of views. My essay question is quite complex and debatable to answer as there are many characters linked to the murder; Macbeth is not solely to blame. I shall focus on my suspects one by one. The three witches, servants of the devils, are very important because they open the play and tell Macbeth and Banquo their future which is partly the cause of the murder of King Duncan. My first suspects are the three witches. The reason for this is their dark prophecy for Macbeth: "All hail Macbeth that shalt be king hereafter" The witch's prediction gave an indication to Macbeth about the future. ...read more.

Macbeth is trying to tell Lady Macbeth that he does not want to kill King Duncan because of the love and respect Macbeth has received from him, but unfortunately once again Lady Macbeth pressurizes Macbeth in committing the dirty deed which is killing King Duncan because it is the only way he can get his hands on the throne. She insults and emotionally mocks him because Lady Macbeth knows how emotional Macbeth can be. She says "Have plucked my nipple from his boneless gums/And dashed the brains out, had I sworn /As you have done this to me" Lay Macbeth uses motherhood and love for a baby to make Macbeth change his mind and soon after he does. As well as Lady Macbeth and the three witches, by some means I also find Banquo responsible for the death of King Duncan, this is because after listening to the witches predictions Banquo would always bring the subject up of Macbeth becoming King. ...read more.

However after Macbeth committed King Duncan's murder he was feeling guilty and was a little fidgety. After analysing the characters it seems that there is no actual murderer who is responsible for King Duncan's murder. Lady Macbeth planned out every step of the murder but she herself never committed it, whereas Macbeth did but, he was pressurised in doing it. At a certain extent Banquo is as much responsible as Lady Macbeth because he continuously mentioned the witch's prophecies for his own selfish need, he pushed Macbeth in doing the dirty deed so he doesn't have to carry out the murder. The witches are an additional part of King Duncan's murder because if it wasn't for their predictions the murder would not have taken place. Macbeth's ambitions, emotions and confidence had overtaken him and cause him to perform the murder. The above suspects are only part of the murder none of them played the actual role as the murderer. ?? ?? ?? ?? Farhana Rahman Yr 10 Who is responsible of King Duncan's murder? - 1 - ...read more.