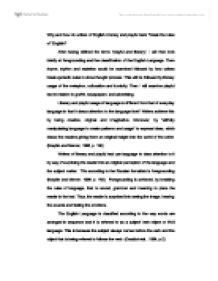 Why and how do writers of English Literary and playful texts &quot;break the rules of&quot; English?

Why and how do writers of English Literary and playful texts "break the rules of" English? After having defined the terms "playful and literary", I will then look briefly at foregrounding and the classification of the English Language. Then rhyme, rhythm and repletion would be examined followed by how writers break syntactic rules to show thought process. This will be followed by literary usage of the metaphor, collocation and iconicity. Then I will examine playful text in relation to graffiti, newspapers and advertising. Literary and playful usage of language is different from that of everyday language in that it draws attention to the language itself. Writers achieve this by being creative, original and imaginative. Moreover, by "skilfully manipulating language to create patterns and usage" to express ideas, which draws the readers giving them an original insight into the world of the writer. (Maybin and Mercer, 1996, p. 198) Writers of literary and playful text use language to draw attention to it by way of surprising the reader into an original perception of the language and the subject matter. This according to the Russian formalists is foregrounding (Maybin and Mercer, 1996, p. ...read more.

By doing this, he foregrounds the reader into an innovative outlook and the reader receives the impression that there is no escaping from the fog; it is all invasive invading the countryside, the social, cultural and political environment. (Maybin and Mercer, 1996, p.167) Another distinctive feature of literary usage is the metaphor and collocation. Metaphors are comparisons that are not made explicit. They exploit the meanings of words and "are slipped into "the sentence (Maybin and Mercer, 1996, p.165). The rules of English are broken by the metaphor by playing on the various meanings of a word and the paradigmatic relationship of a word. As in the use of "burning" and "burnt" in Blake's The Tyger the words not only refer to the eyes of the Tyger but also to the furnace and the stars when speared are also burning too such an extent that they water the heaven with their tears. "Collocation refers to the combining tendencies of words" (Maybin and Mercer, 1996, p.169) that is, the relationship words have with each other, the meanings that are associated with words and in the context that they are normally used. ...read more.

"Belly Nice (model Naomi Campbell with bare stomach), Wedding Prez (President Clinton unexpectedly attends a wedding)" (Maybin and Mercer, 1996, p.217). They by virtue of being tabloid newspapers need to capture the readers' attention quickly and be able to express in a short headline the nature of the article. Therefore, by using headlines like "Belly Nice" they play on the phrase "very nice" in referring to the bare stomach and associating it to her second name Campbell. Another area that breaks the rules of English in a playful way is advertising. Advertising uses all the literary techniques of foregrounding to sell the product, image or idea. In the P&O advertisement, the text is simple; it has rhyme, rhythm and repetition, and seems at first glance to be a simple, child's first reader. However, each line does not have the object. It is only at the end that one realises that the last word is the object of the previous lines. In conclusion after having looked at the various distinctive features of literary and playful usage of text one can see that writers, poets, graffiti writers, journalist and the advertisers use and break the rules of English to foreground there ideas in a creative, original and imaginative way. ...read more.