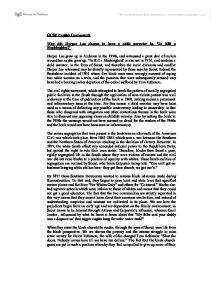 Why did Harper Lee choose to have a child narrator in, 'To Kill a Mockingbird?'

GCSE English Coursework Why did Harper Lee choose to have a child narrator in, 'To Kill a Mockingbird?' Harper Lee grew up in Alabama in the 1930s, and witnessed a great deal of racism around her as she grew up. 'To Kill a Mockingbird' is also set in 1930, and contains a child narrator, in the form of Scout, and therefore the racial divisions and conflict Harper Lee witnessed may be directly represented by those seen by Scout. Indeed, the Scottsboro incident of 1931 where five black men were wrongly accused of raping two white women on a train, and the passions that were subsequently aroused may have had a bearing on her depiction of the ordeal suffered by Tom Robinson. The civil rights movement, which attempted to break the pattern of racially segregated public facilities in the South through the application of non-violent protest was well underway at the time of publication of the book in 1960, making racism a prominent and inflammatory issue at the time. For this reason a child narrator may have been used as a means of deflecting any possible controversy leading to censorship, in that those who disagreed with integration and other contentious themes in the book were able to discount any opposing views as childish naivety. ...read more.

Consequently prices fell and therefore farmers especially were unable to sell their products for a profit: "The Cunninghams are country folks, farmers, and the crash hit them the hardest." When Walter Cunningham is invited to Scout's home she disregards him, saying "He ain't company, Cal , he's just a Cunningham". However, Calpurnia forces her to take this back at once, "Don't you let me catch you remarkin' on their ways like you was so high and mighty! Yo' folks might be better'n the Cunninghams but it don't count for nothin' the way you're disgracin' 'em". This is an example of Scout changing views she previously held, and it also shows us the benefits of integration in that Calpurnia, who has seen prejudice in her own life, now passes on the benefits of her own experience in order to make Scout more open and tolerant. However, ridding herself of her unjustified prejudices towards Boo Radley, a recluse, is more dramatic and shows the reader how wrong one's initial judgements can be. Although the children had never seen Boo he is described as having "a long jagged scar that ran across his face; what teeth he had were yellow and rotten; his eyes popped, and he drooled most of the time." However, as the children become more mature and educated they realise that he has his own personal reasons for making himself a recluse ...read more.

When a man from the lynch mob "yanked Jem off his feet" Scout responds immediately with "Don't you touch him" and then proceeds to kick him. Scout has also lost her mother and therefore her vulnerability makes the reader warm to her further. I think that Harper Lee also uses a child narrator in order to introduce humour which sweetens the pill and making the book less intense. Humour is used in many situations throughout the book, but its use is particularly significant in the trial scene which is very tense and serious. In the middle of the trial, we are told of Scout's asking regarding Judge Taylor "how Mrs. Taylor stood kissing him, but Atticus said they didn't kiss much". We are also told in detail how "Judge Taylor disposed of the severed end by propelling it expertly to his lips and saying 'Fhluck!'", an absurd observation in the middle of an important trial. Atticus educates Scout and the reader by teaching them that, "You never really understand a person until you consider things from his point of view, until you climb into his skin and walk around in it." This is a very valuable lesson in Maycomb's highly prejudiced society and is really the essence of the book. The importance of understanding other people as opposed to pre-judging them is illustrated to the reader, and will make them him or her realise that the only thing that makes whites and blacks different is simply the colour of their skin. ...read more.