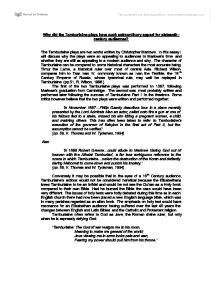 Why did the Tamburlaine plays have such extraordinary appeal for sixteenth-century audiences?

Why did the Tamburlaine plays have such extraordinary appeal for sixteenth-century audiences? The Tamburlaine plays are two works written by Christopher Marlowe. In this essay I will discuss why the plays were so appealing to audiences in Marlowe's time and whether they are still as appealing to a modern audience and why. The character of Tamburlaine can be compared to some historical characters the most accurate being Timur the Lame, a historical ruler over most of central Asia. Richard Wilson compares him to Tsar Ivan IV, commonly known as Ivan the Terrible, the 16th Century Emperor of Russia, whose tyrannical rule, may well be replayed in Tamburlaine. (pp.51, R. Wilson, 1996.) The first of the two Tamburlaine plays was performed in 1587, following Marlowe's graduation from Cambridge. The second was most probably written and performed later following the success of Tamburlaine Part 1 in the theatres. Some critics however believe that the two plays were written and performed together; 'in November 1587...Philip Gawdy describes how in a piece recently presented by the Lord Admirals Men an actor, called onto fire a gun at one of his fellows tied to a stake, missed his aim killing a pregnant woman, a child and maiming others. ...read more.

Muslim Council of Britain, who said 'In the context of a fictional play, I don't think it will have offended many people.' Britain was a wholly and strongly Christian nation in 1587; no one would oppose the destruction of a book of another holy order, which they believed to be blasphemous. Violence and the disorder of war was part of contemporary Elizabethan England. Public execution and punishment in gruesome manners was a form of entertainment at the time of the Tamburlaine plays. As was making an example of those executed, as Tamburlaine's victims are hung on the city walls, many beheaded criminals had their head displayed on spikes to warn others. Many plays performed at this time used war or famous historic heroes of war as a basis for their storylines and often had what is to a modern eye grotesque and appalling episodes of violence. This is shown in Shakespeare's Titus Andronicus (1584), without doubt his most b****y play. 'Marlowe achieved far greater fame and popularity than Shakespeare at the same point in their theatrical careers (both born 1564).' (pp.95, C. Breight, 1996) With the exception of Titus Andronicus Shakespeare did not really come into his own until the early 1590's and was not recognised as ...read more.

rules, and it is of such force that it not only upholds those who are born princes, but it often enables men to rise from a private station to that rank.' This quote from Machiavelli's The Prince was a European view on how a prince or other leader should be, it states how a person of a lower status can raise himself up from private to Prince as Tamburlaine has done from shepherd to King. It states that a prince's sole study should be the art of war in his role as protector. Tamburlaine is a strong leader, his subjects are safe from any surrounding forces as shown in the way that Tamburlaine has fought off two advances from Callapine, the son of Bajazeth the former Turkish ruler whom Tamburlaine tortured and humiliated. His knowledge and performance in war is unmatchable. In conclusion the Tamburlaine plays would have appealed to a 16th century audience for a number of reasons. Mainly for the various ways in which the character of Tamburlaine presents himself, as villain but also as an inspiration, as a man who has become drunk with power, but also a strong leader who knows what he is doing on the battlefield. Tamburlaine's self contradictions are endless. ...read more.