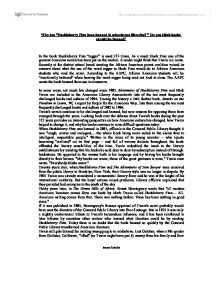 Why has &quot;Huckleberry Finn been banned in schools and libraries? &quot; Do you think books should be banned?

Why has "Huckleberry Finn been banned in schools and libraries? " Do you think books should be banned? In the book Huckleberry Finn "n****r" is used 213 times. As a result Huck Finn one of the greatest American novels has been put on the market. A reader might think that Twain is a r****t. Recently at the district school board meeting the African American parent coalition voiced its concern about what the use of the word n****r in Huck Finn would do to African American students who read the novel. According to the AAPC, African American students will be "emotionally battered" when hearing the word n****r being read out loud in class. The AAPC wants the book banned from use in classroom. In some ways, not much has changed since 1885. Adventures of Huckleberry Finn and Mark Twain are included in the American Library Association's lists of the ten most frequently challenged books and authors of 1996. Tracing the history a little further back, Attacks on the Freedom to Learn, '96, a report by People for the American Way, lists them among the ten most frequently challenged books and authors of 1982 to 1996. Twain's novels continue to be challenged and banned, but new reasons for opposing them have emerged through the years. ...read more.

Today there is no doubt that the book banned so quickly by the Concord Public Library transformed American literature. Twain still gets blamed for inciting young people to misbehave. Last October, when a 9th-grader from Hollister, California, "lifted" (as Twain might have put it) money from his family and flew off to Hawaii, his mother explained "Tom Sawyer is his hero so he thought he would venture off like (Tom Sawyer) did." In the 1990s, apparently, a flight to Hawaii replaces Tom and Huck's pirate trip to Jackson's Island. Although fears that Twain's books will incite youthful rebellion persist, that is not the primary reason they are challenged today. Since the 1950s, Twain's depiction of race relations in the pre-Civil War South has caused most objections to Huckleberry Finn. Because Twain used the word "n****r" repeatedly in the novel, parents and teachers are concerned about the effect that reading it has on students. Race was not an issue for the library directors in Concord and Brooklyn, but it came to the fore when the Civil Rights Movement brought increased attention to connections between racial epithets and racial violence. "For me, each sound of the word 'n****r' rings out like the sound of rifle fire as the bullet tears through the face of Dr. ...read more.

I personally think that books shouldn't be banned because books are there to read and enjoy, not setting a bad example. If you let children in secondary school read grown up books, they should be grown up to accept bad language such as the word n****r, which shouldn't be used racially to people. Maybe in a humorous way, like Mark Twain did in the book Huckleberry Finn. I don't think that Mark Twain was being r****t to people. It could set a bad example to younger children that are in primary school because they might think it's a cool word to use to other people like Huckleberry Finn did and say it all the time, but they don't really know what it means. In some countries r****m is taken very seriously because of what has happened in the past with black and white people. Such as America. They would find it very disturbing if someone said the word n****r out loud. Especially to children in class. When you have got someone who admires Huckleberry Finn, they might do the same thing as him. So you should only let people that are grown up and are able to accept the bad language in banned books. James Sztejka ...read more.