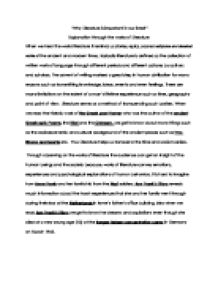 'Why Literature is important in our lives'. There are many limitations on the extent of a mans lifetime experience such as time, geography and point of view. Literature serves as a method of transcending such barriers.

"Why Literature is important in our lives?" Explanation through the works of Literature When we hear the world literature it reminds us stories, epics, sacred scriptures and classical works of the ancient and modern times. Basically literature is defined as the collection of written work of language through different periods and different cultures by authors and scholars. The advent of writing marked a great step in human civilization for many reasons such as transmitting knowledge, ideas, events and even feelings. There are many limitations on the extent of a man's lifetime experience such as time, geography and point of view. Literature serves as a method of transcending such barriers. When we read the historic work of the Greek poet Homer who was the author of the ancient Greek epic Poems, the lliad and the Odyssey, we get to know about many things such as the socioeconomic and cultural background of the ancient places such as Troy, Ithaca and Sparta etc. Thus Literature helps us transcend the time and social barriers. ...read more.

It teaches us to listen carefully and look deeply attempting to understand more than the meaning that we see from the surface. Literature plays an important role in the religions too. The Koran and the Bible helped to propagate their religions and to preserve some of the teachings without further corruption Mahabharata and Ramayana are great works of literature as they are sacred to the people. Thus literatures preserve the Values and ideals of the people. Books like Tripitaka were written during worst draughts in the purpose of preserving Buddhism and the Buddhist concepts. Literature can bring out the importance of preservation. In G.M Hopkins's poem Binsy poplars he speaks of importance of preserving nature so the next generations also will be able to see the beauty of the nature. "After -comers cannot see the beauty been" (line 19) Also the poem portrays the beauty of the poplar trees that had been dandling before they were cut off from the earth. ...read more.

"Was he free? Was he happy? The question is absurd, had anything been wrong we should have certainly heard". (Lines 27, 28).Thus Ann Ranasinghe in her poem Secretariat brings out the inefficiencies of bureaucracy. Thus by reading literary works people can acquire knowledge and wisdom also it allows people to look at things in a critical and multi dimensional way. As the American poet Robert Frost says "The poem begins with delight and ends in wisdom". It is through reading such great literary and poetic works, that one understands life. They help a person to take a closer look at the different facts of life. In many ways it can change one's perspective towards life. Therefore literature is rather important in our lives. It does help us to cope with the society. Literature brings us face to face with the essential human conditioning all its sublimity and all its degradation: All its powers and abilities as well as all its limitations. Emotions like love, forgiveness, generosity, etc and anger, malice, hatred etc. are conveyed through literary works. This shows that literature touches a wide range of human emotions. ...read more.