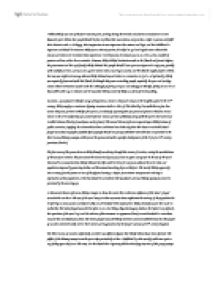 William Blake was one of the first romantic poets, writing during the French and American revolutions in 1780

William Blake was one of the first romantic poets, writing during the French and American revolutions in 1780. Romantic poets believe that people should be free to follow their own desires, everyone has a right to pursue and fulfil their desires in order to be happy, that imagination is more important than science and logic, and that childhood is important and should be innocent. Blake was a visionary writer, he talked to God and angels came to him in his dreams and visions. He translates these experiences into his poems. He viewed God as an artist, active and full of passion and love, rather than a scientist. However, Blake disliked institutions such as the Church and formal religion, the government and the royal family. Blake believed that people should have open marriages and to enjoy s*x, possibly with multiple partners, and was also against unions such as marriages. Society and the Church taught people to think that s*x was sinful and wrong, whereas Blake believed s*x and desire is a connection to God and spirituality. Blake was especially frustrated with the Church, he thought they were controlling people, especially the poor and working classes. These institutions would teach that although people may be poor and unhappy in this life, if they do not rebel they will be able to go to Heaven and be rewarded. This was seen by Blake as a form of brain washing, 'London', a poem found in Blake's Songs of Experience, relates to the poet's views on the English capital in the 19th century. Blake employs a consistent rhyming structure similar to that of 'The Schoolboy' but with shorter four line verses. The poem, written in Blake's first person, is obviously expressing his own personal opinions. The first stanza relates to the strict uniformity of London's plotted land (a pet hate of Blake's) along with the poet's observations of troubled citizens ('Marks of weakness, marks of woe'). ...read more.

He has been taught questions and answers, and knows that God was once a lamb and then a child, but the child no longer questions what he has been taught. He (or she) is happy and safe, and so is still in the world of innocence. In this poem Blake is challenging the way the Church has brain washed children to not question their fate and to accept unhappiness. The child in the Lamb describes God as 'He is meek, and He is mild;' which to Blake is too passive. A God needs to be strong and helpful, the opposite to meek and mild. The language used is simple, and reflective of the world of innocence. For example, 'delight' and 'bright'. This is also end rhyme, to emphasise the child's delight at talking with the little lamb about his God, and how everyone is a part of him. The child rejoices in his knowledge and is proud of himself on teaching the lamb about his creator. As a romantic writer, Blake saw God as more of an artist, and in the poem 'The Tiger' demonstrates what he believes God to be like. The Tiger is paired with the Lamb, and although it is in the songs of experience, the person is returning to innocence by asking so many questions. These questions, such as 'In what distant deeps or skies Burnt the fire of thine eyes? On what wings dare he aspire? What hand dare seize the fire?' challenge God. In this poem, Blake is marvelling what kind of God could make such a beautiful, deadly creature. Blake is showing that if God can make something as gentle as a lamb, and then makes a killing machine such as a Tiger, He must be dangerous. Blake is also portraying God as a workman or blacksmith, with the line 'In what furnace was thy brain?'. The God in this poem, despite not answering the questions, is clearly more of an artist. ...read more.

Although this child has parents, they have left him to go to the church to pray. It is as though he has no parents, like the boy in the songs of innocence. Blake is showing that the parents have also been corrupted by the Church, and are helping to brain wash their child. Blake also explicitly demonstrates his views on the monarchy and the church in the last two lines, 'And are gone to praise God and His Priest and King, Who make up a Heaven of our misery.' The full stop at the end of the sentence finalises the poem's message that the child, along with his parents and church goers, are doomed to be unhappy whilst the Church and monarchy continue to restrict and control. The young boy in the world of experience appears no hope of return to innocence. Unlike the boy in the songs of innocence, this child cannot even dream in the world of innocence. Blake is showing the boy is so restricted that not even in his dreams is he able to be free. In the first poem, the boy uses 'I' , whereas this child is described as 'a little black thing'. This is showing that the child is not aware of its own identity, it has been so exposed to the world of experience. 'a little black thing' also shows that he has been corrupted, the colour black being a negative colour in the world of experience. 'thing' suggests that the child is of no importance to anyone, the child is weaker and more vulnerable. He has no protection from parents or even other chimney sweepers as companions and support. He is totally alone in a world where no one, including the church, will help him. 'Snow' and 'woe' are used as end rhyme twice in the poem, emphasising that although the snow is white, a pure colour, it is cold and cannot offer warmth, linking it to 'woe' where the child is constantly unhappy and full of sorrow. ...read more.