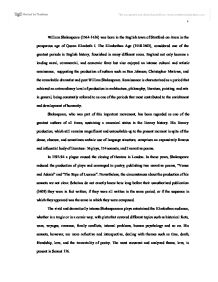 William Shakespeare (1564-1616) was born in the English town of Stratford-on-Avon in the prosperous age of Queen Elizabeth I. The Elizabethan Age (1558-1603), considered one of the greatest periods in English history, flourished in many different areas. England not only became a leading naval, commercial, and economic force but also enjoyed an intense cultural and artistic renaissance, supporting the production of authors such as Ben Johnson, Christopher Marlowe, and the remarkable dramatist and poet William Shakespeare. Renaissance is characterized as a period that achieved an extraordinary level of production in architecture, philosophy, literature, painting, and arts in general, being constantly referred to as one of the periods that most contributed to the enrichment and development of humanity. Shakespeare, who was part of this important movement, has been regarded as one of the greatest authors of all times, sustaining a canonical status in the literary history. His literary production, which still remains magnificent and untouchable up to the present moment in spite of the dense, obscure, and sometimes archaic use of language structure, comprises an expansively famous and influential body of literature: 36 plays, 154 sonnets, and 2 narrative poems. In 1593-94 a plague caused the closing of theaters in London. In those years, Shakespeare reduced the production of plays and converged to poetry, publishing two narrative poems, "Venus and Adonis" and "The Rape of Lucrece". ...read more.

In the second quatrain, there is an allusion to the light that comes from a lighthouse ("ever-fixed mark" - line 5) and safely guides navigators through a storm. Love is referred as a "star" (line 7) that conduct lovers through tempests and helps them to overcome any crisis. The third quatrain is a compassionate assertion that love can prevail over one of its worst enemies, time ("Love's not Time's fool" - line 9), and bear difficult moments ("bending sicke's compass" - line 10) through the years until the end of life, when it is necessary to face the judgment day ("bears it out even to the edge of doom" - line 12). In the final eloquent couplet, in order to strengthen the belief in an ideal love, the persona uses a syllogism, asserting that if his definition proves false, then he never wrote and no man ever loved ("If this be error and upon me prov'd, / I never writ, nor no man ever lov'd." - lines 13 and 14). This is a declaration that, according to Amanda Mabillard, "if he has in fact judged love inappropriately, no man has ever really loved in the ideal sense that the poet professes". As far as diction is concerned, Shakespeare did not exploit his typical use of complex vocabulary to convey his feelings, although intriguing, peculiar syntactic inversions are present in the sonnet. ...read more.

keep on nurturing romance and inspiring people through the years as it deals with a simple and universal theme that will never become outmoded: a legitimate endless love. Shakespeare's unique skills to portray and analyze the human condition in a meticulous, deep approach has established him as a genius in the literary and even linguistic fields. He produced several masterpieces that have been intriguing, along the years, researchers and critics, who have become amazed when they get in touch with all of Shakespeare's literary production, wondering how could a man be able to master the proficiency in the writing process and keep this standard in all his works. The writing process for Shakespeare, however, was not an enigma. For him, poets are merely creatures who possess a talent to give names, through writing, to things that are obscure for most people: "The poet's eye, in a fine frenzy rolling, Doth glance from heaven to earth, from earth to heaven; And as imagination bodies forth The forms of thing unknown, the poet's pen Turns them to shapes, and gives to airy nothing A local habitation and a name." (A Midsummer Night's Dream v, i, 12-17) William Shakespeare indeed possessed this talent and used it to both touch and entertain people, creating his unequaled style and production, which will keep on being worshiped as long as humanity exits. ...read more.