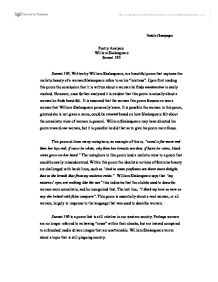 Natalie Champagne Poetry Analysis William Shakespeare Sonnet 130 Sonnet 130, Written by William Shakespeare, is a beautiful poem that captures the realistic beauty of a woman Shakespeare refers to as his "mistress". Upon first reading this poem the conclusion that it is written about a woman he finds unattractive is easily reached. However, once further analyzed it is evident that this poem is actually about a woman he finds beautiful. ...read more.

William Shakespeare may have directed his poem toward one woman, but it is possible he did that as to give his poem more focus. This poem utilizes many metaphors, an example of this is, "coral is far more red then her lips red; if snow be white, why then her breasts are dun; if hairs be wires, black wires grow on her head." ...read more.

The last line, "I think my love as rare as any she belied with false compare". This poem is essentially about a real woman, or all women, largely in response to the language that was used to describe women. Sonnet 130 is a poem that is still relative in our western society. Perhaps women are no longer referred to as having "roses" within their cheeks, but are instead compared to airbrushed media driven images that are unattainable. William Shakespeare wrote about a topic that is still plaguing society. ...read more.