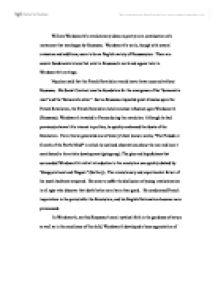 William Wordsworth's revolutionary ideas on poetry are a continuation of a movement that was begun by Rousseau.

(Solitary). The revolutionary and experimental fervor of his youth had been tempered. He came to suffer the disillusion of young revolutionaries in all ages who discover that death harks more harm than good. He condemned French imperialism in the period after the Revolution, and his English Nationalism became more pronounced. In Wordsworth, we find Rousseau's semi mystical faith in the goodness of nature as well as in the excellence of the child. Wordsworth developed a keen appreciation of nature that informed much of his later writings. He spent ample time "drinking in" the nature which moved his imagination. ...read more.

The Romantic poets recognized Rousseau as the philosophical founder of Romanticism. Romanticism and society. The French philosopher Jean-Jacques Rousseau taught that people are naturally good but have been corrupted by the institutions of civilization. He idealized the noble savage, an individual unspoiled by luxury and sophistication, and he argued that in a virtuous society children would grow up honest and free. Influenced by these ideas, many Romantics opposed political tyranny and took part in liberal and revolutionary activities. The revolutions in America and France during the late 1700's were influenced by Romantic ideals. Many of Rousseau's theories influenced educational theory and practice. Romanticism also became associated with economic and social reform, especially in the United States. ______________ ...read more.