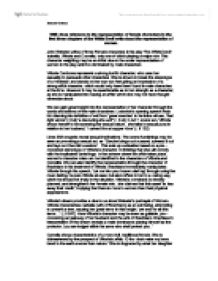 Vittoria's comeback is cleverly planned, and strengthen's her female role, she claimes that this asset 'takes away their credit,' implying that there is more to women than their physical apppearence. Vittoria's dream provides a clue to us about Webster's portrayal of Women. Vittoria characterises Isabella (wife of Brachiano) as an evil being, attempting to unearth a tree, causing her great terror in this insight, 'yet and for all this terror...' (I, ii 247) Here Vittoria's character may be seen as gullable, pre-conceiving an jealousy of her husband and the wife of Brachiano. Brachiano's interpretation of the dream reveals a male dominance placing himself as the protector, 'you are lodged within his arms who shall protect you..' Cornelia shows characteristics of a more civil, traditional female. She is disheartened by the prospect of Vittoria's affair, 'O tho dost make my brow bend to the earth sooner than nature.' She is disgraced by what her daughter has done to her reputation, and believes that Women should stay faithful and proppper. Her power of speech is dominating, and she shows control over the situation. ...read more.

In Act II scene ii Webster writes of a dumb show in which a painting of Brachiano is coated with poison, Isabella, Brachiano's wife proceeds to kiss it three times before she retires to bed, and falls down dead. Brachiano's response to this reveals his feelings towards her, 'excellent, now she's dead' he clearly has no respect for the woman. The court scene reveals most about Vittoria's character. She appears as a very shameless strong character. She requests the judge to speal in 'his usual toungue' so that the audience may hear the trial fairley. This may be seen as a foolish act on her behalf, as she will be showing herself up, however another interpretation may see her as a brave and fare character. A true reflection of the character of women can be seen in (III, ii 136) 'Must personate masculine virtue to the point' She clearly feels under-represented as female, so believes she must stand as a man to be understood. As a character, Vittoria stands to represent females in the play as a whole. Although her characteristics change, she is a strong and intellectual character who bears a positive representation. ...read more.