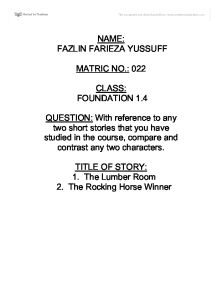 With reference to any two short stories that you have studied in the course, compare and contrast any two characters.

NAME: FAZLIN FARIEZA YUSSUFF MATRIC NO.: 022 CLASS: FOUNDATION 1.4 QUESTION: With reference to any two short stories that you have studied in the course, compare and contrast any two characters. TITLE OF STORY: 1. The Lumber Room 2. The Rocking Horse Winner Characters play an important role in writing short stories. The characters often make the story more interesting thus they attract more readers. Two characters can be similar to each other but they are always differing in some other ways. I have chosen Nicholas from 'The Lumber Room' because I had fun reading the story and I noticed that his character, being curious and naughty but brilliant, really brings up the story. Paul from 'The Rocking-Horse Winner' on the other hand is also curious but he is rather innocent compared to Nicholas. Therefore I have decided to compare and contrast these two characters. Both Nicholas and Paul are young boys aged between 8 and 10 years old. ...read more.

The two characters show that they are able to see the significant of the lumber room and the rocking-horse. The ability to do so makes them a detailed person. As for Nicholas, he is able to interpret the tapestry in the lumber room. "That part of the picture was simple if interesting, but did the huntsman see, what Nicholas saw, that four galloping wolves were coming in his direction through the wood?" This conveys the impression that Nicholas concludes that a huntsman can be the hunter and can be hunted. On the other hand, Paul sees the rocking-horse as luck and also a real horse that will leads him to win a horse race. That is why he is in a deep concentration when he rides the rocking-horse; he is imagining that he is in a real horse race and he is winning the race. Not always two characters are similar. Even though they are similar in some ways, they have a lot to compare between each other. For instance, I considered Nicholas as a mysterious young boy. ...read more.

After he has won the horse race, he has asked his lawyer to give the money to his mother as her birthday present, a thousand a year for the next five years, without his mother's knowledge. Paul shows that he is responsible when he wants to look for money so that he can stop the whisperings and able to get his mother's love. After comparing and contrasting the characters, Nicholas and Paul, I realised that Nicholas is a stiff character while Paul is a round character. Nicholas' characteristic does not change from the beginning of the story till the end. He is still a naughty young boy, from telling his aunt about the frog in his basin of bread-and-milk and till the time when he rebels against his aunt. Otherwise Paul, his characteristics changes from being na�ve and innocent to mentally and emotionally challenged where at the end of the story he dies because of tensed and brain fever. In my opinion, these two characters succeed in bringing up the two short stories. D. H. Lawrence and H. Munro Saki thrived in expressing their thought trough these two characters. ...read more.