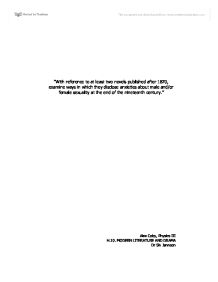 &quot;With reference to at least two novels published after 1870, examine ways in which they disclose anxieties about male and/or female sexuality at the end of the nineteenth century.&quot;

"With reference to at least two novels published after 1870, examine ways in which they disclose anxieties about male and/or female sexuality at the end of the nineteenth century." Alex Coby, Physics III H.10. MODERN LITERATURE AND DRAMA Dr Siv Jannson The end of the nineteenth century was, like the end of the twentieth, a time filled with fear, anxiety and panic. All major issues in society at any time are generally represented in the literature of the time and this was certainly the case at the end of the nineteenth century. There were many reasons for anxiety; the collapse of empire, the rising Women's emancipation movement and the rise of the theories of Darwin and Freud, amongst others. The primary anxiety at the time, in my opinion, was the fear of 'perverse' sexuality, be it the empowerment of women and the 'decadent', or h********l man. The Picture of Dorian Gray, by Oscar Wilde and The Strange Case of Dr Jekyll and Mr Hyde by Robert Louis Stevenson both illustrate this fin de si�cle s****l anxiety to great effect, and it is on these two novels that I will concentrate. They approach these anxieties in different ways, and while Dorian shows the personal anxieties felt by the h********l in fin de si�cle England, Jekyll and Hyde exposes the anxieties felt towards the h********l: As Showalter said, Jekyll and Hyde can be most convincingly read as a fable of fin de si�cle panic aimed at the h********l. Before one can analyse the way in which these anxieties manifest themselves in these novels and others at the time one must first examine the cause for said anxieties, and look at the way that society as a whole reacted to them: Any analysis of the novels are almost meaningless without first considering their socio-political context. At the start of the nineties there was a great deal of concern about the slipping moral standards of the country as a whole and indeed that of the entire continent. ...read more.

Although in the end she is cast away like all the other people who care for Dorian throughout the novel, but it is not without some remorse, as demonstrated by Dorian's reaction when he hears the news of her death. Basil's feelings towards Dorian seem, initially, to be traditionally maternal - not paternal - as he seems to wish to indulge Dorian's every whim, but also to protect him from the influence of Lord Henry, despite the fact that, he believes him to be a fundamentally good person. 'I believe that you really are a very good husband, but that you are thoroughly ashamed of your own virtues. You are an extraordinary fellow. You never say a moral thing, but you never do a wrong thing. Your cynicism is simply a pose' 'Being natural is simply a pose, and the most irritating pose I know,' cried Lord Henry, laughing.' The first time that we catch sight of Dorian the image is most definitely that of a young boy. He is bored, and described as 'swinging round on the music-stool, in a wilful and petulant manner', but Lord Henry immediately sees why "Basil Hallward worshipped him". At this point, however, there seems to be no real anxiety but this soon changes when, after a number of nostalgic platitudes about returning to some 'Hellenic ideal' - itself a possible euphemism for h********l feelings - and about the evils that come from resisting temptation and trying not to sin, he showers Dorian with complements. Dorian is taken aback by this, and has no real idea how to deal with it. It is here that the true nature of Dorian and Lord Henry's relationship is revealed, and the groundwork for all their future interactions is laid. As Dorian stands there and thinks over what Lord Henry has said to him, something stirs within him, and he takes on Lord Henry's thoughts and suggestions as his own absorbing them into his psyche as if they had always been there. ...read more.

Hysteria was seen as a female affliction - as the name, derived from the Greek for womb, implies - and of the feminine aspects of the psyche, which were often seen as overly active in homosexuals by psychoanalysts of the time, who were just beginning to come to the forefront of the medical profession. While Hyde may be free from guilt and consequences Henry Jekyll is not: like in Dorian the guilt becomes too much for the 'uncorrupted' half of the pair, and they attempt to destroy the other: in Dorian's case he plunges the knife into the portrait, and kills himself by doing so, while Jekyll consumes poison in the form of Edward Hyde and kills both parties, but as in Dorian the corpse that is left behind bears the marks of the 'dual'. While both novels deal with anxieties that pertain primarily to male sexuality at the end of the nineteenth century they do so in different ways: The Picture of Dorian Gray seems to be Wilde's way of dealing with his own dualities and anxieties, whereas The Strange case of Dr Jekyll and Mr Hyde, although it deals with issues of Stevenson's own sexuality it has far more to do with the anxieties of society itself. Dorian Gray seemed to touch more of a nerve at the time, and was seen as containing a corrupting influence to parallel that of A Rebours in Dorian Gray. However this stemmed from its seeming encouragement of the decadence and social decay that campaigners like Booth and Stead where trying to halt, rather than any of the anxiety that it portrays - as this was missed by most of its detractors at the time, as was Dorian's final self-administered retribution. Jekyll and Hyde caused less outcry over its h********l content due to the fact that it does not really deal with h********l feelings directly, and certainly not from any sympathetic characters, but more with the reactions of society to Edward Hyde. ...read more.