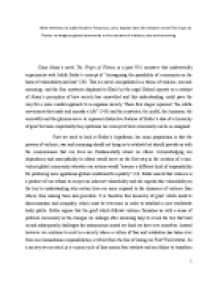 With reference to Judith Butler's Precarious Lives, explain how Chris Abani's novel The Virgin of Flames re-imagines global community in the contexts of violence, war and mourning.

﻿With reference to Judith Butler's Precarious Lives, explain how Chris Abani's novel The Virgin of Flames re-imagines global community in the contexts of violence, war and mourning. Chris Abani?s novel The Virgin of Flames is a post 9/11 narrative that inadvertently experiments with Judith Butler?s concept of ?reimagining the possibility of community on the basis of vulnerability and loss? (20). This is a novel encapsulated in a theme of violence, war and mourning and the four mysteries displayed to Black by the angel Gabriel operate as a catalyst of Abani?s perception of how society has unravelled and this understanding could pave the way for a more candid approach to re-organise society. These four stages represent ?the subtle movements that made and unmade a life? (143) and the mysteries; the joyful, the luminous, the sorrowful and the glorious serve to represent distinctive features of Butler?s idea of a hierarchy of grief but more importantly they epitomise her concept of how community can be re-imagined. First we need to look at Butler?s hypothesis, her main proposition is that the powers of violence, war and mourning should not bring us to retaliate but should provide us with the consciousness that our lives are fundamentally reliant on others. Acknowledging our dependency and susceptibility to others would serve as the first step in the creation of a non-violent global community whereby our actions would ?assume a different kind of responsibility for producing more egalitarian global conditions for equality? (14). ...read more.

The class proceeded to mutilate the dolls with no remorse ?hacking and laughing until in a frenzy they butchered all the dolls? (194). Iggy was horrified by the lack of anguish in the students of modern America which signifies Abani?s belief that Western society encourages and creates a hierarchy of grief. However Bomboy and Iggy are still able to exist side by side without the prospect of violence even though Bomboy took part in the mutilations because Iggy does not hold him responsible. The luminous mysteries reveal that we all essentially belong to the same world and we are all affected one way or another by global events, it is how we transform from these that define us, yet why is it then that certain lives are more vulnerable than others to the forces of violence and why are they less grievable? Abani captures these less grievable lives as the ?sorrowful mysteries? are revealed to Black on a journey which shows him the bloodstain ?where a nameless Black boy shot a nameless Brown girl, even as she smiled at him...he...squeezed his fear out in metal? while elsewhere a woman was ?placing flowers curbside for a dead man, or woman, or child that no one wanted to remember? (146-147). What makes these lives less grievable than those portrayed in the ?joyous mysteries?? Why did the nameless Black boy ?squeeze his fear out in metal?? These lives are victims of the hierarchy of grief which is displayed in Butler?s hypothesis whereby it is first and foremost the upper echelons of society that are most grievable even though they produce the circumstances that make people to fall victim to further violence. ...read more.

Here he mourns the sudden transformation and finally succumbs to the vulnerability that unites us all, ?I?m a monster, he thought, and it reminded him of that night he had been raped under the bridge? (287). He is left standing naked, with a retracted p***s, on top of this spaceship over The Ugly Store to the sound of Coltrane?s A Love Supreme for all to see. The ending is ambiguous, however, the inclusion of John Coltrane?s, A Love Supreme, can be seen an important factor in the completion of Black?s transformation. Coltrane revolutionised jazz music, he was one of the pioneer?s of free jazz, an approach to jazz music that broke away from the conventional methods of jazz such as fixed chords and tempos. A Love Supreme, regarded by many as his masterpiece, introduced a new era of rhythm and extended improvisation into jazz and Abani uses this to suggest that Black has now revolutionised himself, he has broke away from the conventions of society, mourned his past and accepted his transformation. As he sought to answer questions concerning his sexuality, race and gender Black concurrently uncovered elements of modern western society that curtail and hinder not only this progression but the possibility of a re-imagined community. Abani illustrates that society is caught up in a vicious circle of love and hate but in accordance with Butler there should be no reason for ?reimagining the possibility of community on the basis of vulnerability and loss? and maybe one day our global community will be revolutionised the same way Coltrane revolutionised jazz music. ...read more.