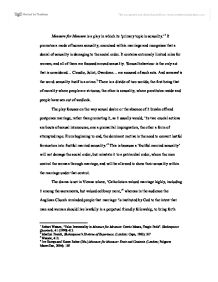 Women in Measure for Measure

Measure for Measure is a play in which its 'primary topic is sexuality.'1 It promotes a mode of human sexuality, exercised within marriage and recognises that a denial of sexuality is damaging to the social order. It contains extremely limited roles for women, and all of them are focused around sexuality. 'Sexual behaviour is the only act that is considered... Claudio, Juliet, Overdone... are accused of such acts. And accused is the word: sexuality itself is a crime.2 There is a divide of two worlds; the first being that of morality where people are virtuous; the other is sexuality, where prostitutes reside and people have sex out of wedlock. The play focuses on the way sexual desire or the absence of it breaks off and postpones marriage, rather than promoting it, as it usually would; 'its two crucial actions are bouts of sexual intercourse, one a premarital impregnation, the other a form of attempted rape. From beginning to end, the dominant motive is the need to convert lustful fornication into fruitful married sexuality.'3 This is because a 'fruitful married sexuality' will not damage the social order, but reinstate it to a patriarchal order, where the men control the woman through marriage, and will be allowed to show their sexuality within the marriage under that control. The drama is set in Vienna where, 'Catholicism valued marriage highly, including it among the sacraments, but valued celibacy more,'4 whereas in the audience the Anglican Church reminded people that marriage 'is instituted by God to the intent that man and woman should live lawfully in a perpetual friendly fellowship, to ...read more.

It is a difficult situation for Isabella to endure, as if she complies with Angelo's request she will be selling her virginity, which is comparable to the whore; however, if she denies Angelo then it can be assumed by the audience that a woman's only asset is her chastity. In a soliloquy Isabella says: "Then, Isabel live chaste, and brother, die: More than our brother is our chastity," (II.iv.183-4) here, she is ranking her chastity compared to the life of her brother, hence she is 'assessing herself by the world's standards'.14 She is debating whether she can be the chaste, silent and obedient Renaissance woman, which would mean that she would be conforming to the patriarchal society, whilst simultaneously deciding what biological function she would fulfil of maid, wife, widow or whore. The biological functions that were assigned to women in early modern society were maid, wife, widow and whore. These positions are 'specifically erotic positions locating women, via an erotic sphere of activity and signification, within the economy of patriarchal heterosexuality.'15 Therefore, the woman is there for the pleasure of the man, the dominant character in society that can control the woman. The composition of womanhood in the early modern era was based upon two fundamental beliefs; 'the Hebraic-Christian tradition of equating Eve with the Fall and the Galenic- Aristotelian account of her 'nature'- that is her physiology and biological function.'16 The essentialist explanations about women's identity are frequently used in most writings about women and 'form the base upon which her place and function in society was described.'17 Therefore, not a lot had changed over ...read more.