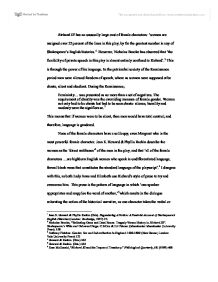 Richard III has an unusually large cast of female characters: 'women are assigned over 22 percent of the lines in this play, by far the greatest number in any of Shakespeare's English histories.'1 However, Nicholas Brooke has observed that 'the flexibility of private speech in this play is almost entirely confined to Richard'.2 This is through the power of his language. In the patriarchal society of the Renaissance period men were allowed freedom of speech, where as women were supposed ot be chaste, silent and obedient. During the Renaissance; Femininity... was presented as no more than a set of negatives. The requirement of chastity was the overriding measure of female gender. Woman not only had to be chaste but had to be seen chaste: silence, humility and modesty were the signifiers so.3 This means that if women were to be silent, then men would have total control; and therefore, language is gendered. None of the female characters have a soliloquy, even Margaret who is the most powerful female character. Jean E. Howard & Phyllis Rackin describe the women as the 'direct antitheses'4 of the men in the play, and that 'all of the female characters ...are highborn English women who speak in undifferentiated language, formal blank verse that constitutes the standard language of the playscript'.5 I disagree with this, as both Lady Anne and Elizabeth use Richard's style of prose to try and overcome him. ...read more.

Rich: My father's death - Eliz: Thy life hath it dishonour'd (IV.iv. 372-75) His wit is no use to him anymore, as he has been outsmarted by Elizabeth; therefore, he resorts to violence: Without her, follows to myself, and thee, Herself, the land, and many a Christian soul, Death, desolation, ruin and decay: It cannot be avoided but by this: (IV.iv.407-410) There is no such conversation that takes place like this in the wooing scene, yet another example of Richard loosing his power. The women in the play operate as a group of mourners; however, they are also the ones in the play who are made to question the very use and function of language. When Queen Elizabeth is mourning the death of her sons she turns to Margaret for help: "My words are dull. O quicken them with thine!"( IV, iv.124) This suggests that she thinks her suffering can be directly transformed into language; thus relieving her pain through the act of speaking, namely cursing: "Thy woes will make them sharp and pierce like mine". (IV. iv. 125) When moments of crisis strike, the women in Richard III are clearly aware that their only weapon is words. The Duchess of York asks: 'Why should calamity be full of words?' (IV. iv. 126) and Queen Elizabeth replies: Windy attornies to their client woes, Airy succeeders of intestate joys, Poor breathing orators of miseries! ...read more.