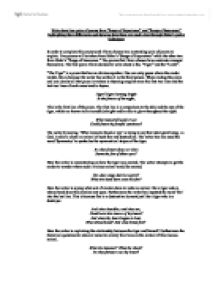 Write about two pairs of poems from &quot;Songs of Experience&quot; and &quot;Songs of Innocence&quot; highlighting their differences and showing how these are made clear through Blake's poetic techniques

Write about two pairs of poems from "Songs of Experience" and "Songs of Innocence" highlighting their differences and showing how these are made clear through Blake's poetic techniques In order to complete this coursework I have chosen two contrasting pairs of poems to explain. Two poems will be taken from Blake's "Songs of Experience" while the other two from Blake's "Songs of Innocence." The poems that I have chosen have contrasts amongst themselves. The first poem I have decided to write about is the, "Tiger" and the "Lamb". "The Tiger" is a poem that has no obvious speaker. One can only guess whom the reader maybe, this is because the writer has written it in the third person. When reading the poem one can clearly tell that poem is written in rhyming couplets were the first two lines and the last two lines of each verse tend to rhyme. Tiger! Tiger burning bright In the forests of the night, This is the first line of the poem. The first line is a comparison to the skin and the eye of the tiger, which are known to be incredibly bright and be able to glow throughout the night. What immortal hand or eye Could frame thy fearful symmetry? The writer by saying, 'What immortal hand or eye' is trying to say that what great being, i.e. God, is able to create an animal of such fear and destruction. The writer has also used the word 'Symmetry' to symbolise the symmetrical stripes of the tiger. In what distant deeps or skies Burnt the fire of thine eyes? ...read more.

I must now highlight the difference between these two poems. The first difference can be found by looking at the heading Blake has placed each poem under. 'The Lamb' has been placed under Songs of Innocence whereas 'The Tiger' is placed under Songs of Experience. This is due to the different types of animals they are and the way they are portrayed by Blake. In these two poems Blake does talk about two animals, but these animals are very different from one another. The tiger is large, ferocious animal whereas the lamb is small and fairly weak. Furthermore the overview content of the poem is different. Overall Blake takes a very pessimistic view in writing 'The Tiger'. The writer uses many similes and metaphors that portray the tiger as being an animal of destruction, such as: What the hammer? What the chain? In what furnace was thy brain? Furthermore the tiger is referred to as being an anvil, a strong, solid unbreakable being. In the lamb, Blake uses a much more positive approach. He sees the lamb as being the opposite to the tiger and he makes this clear in the language he uses to describe the lamb. For example: Softest clothing, woolly, bright; Gave thee such a tender voice. Furthermore Blake goes as far as comparing the lamb's innocence and purity to Jesus. Obviously one can see the personal opinion Blake had on these two animals. The poems are in different due to the poetic techniques Blake uses. One very important technique Blake uses are rhetorical question. 'The Tiger' is mainly composed up of rhetorical questions. ...read more.

This verse is a continuation of the previous verse and Tom's dream. Naked and white refers to the lose of all the soot from their bodies and clothing, 'all their bags left behind' they will leave the bags they collected soot in behind. The last two lines of the verse say that if Tom as to be a good boy he would have god as a father and would be so happy that he would never wish for joy in his life again. And so Tom awoke, and we rose in the dark, And got with our bags and our brushes to work. Tho' the morning was cold, Tom was happy and warm; So if all do our duty they need not fear harm. Here Tom awakes from the dream he has been having and goes to work in the chimneys but this time he fears nothing, although the work he does is dangerous and there is a risk he may die in an accident he does not fear because he knows that if he were to die he would just go to heaven beside God. I am now going to compare the two poems. I similarity between the two poems is that they are both about Chimney Sweepers. Although there content is very different. The poem in Songs of experience is very negative whereas this poem is very positive. This is because in the songs of experience Blake writes about what he honestly thinks would happen in the real world that he lives in, but in the songs of innocence he writes about things he wish would happen. Another similarity between the two poems is the way in which they rhyme. Each verse consists of two rhyming couplets where the first two and last two lines of each verse rhyme. ...read more.