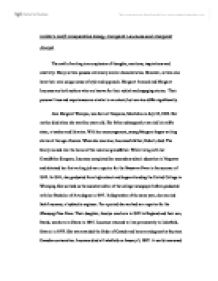 Writer's Craft Comparative Essay: Margaret Laurence and Margaret Atwood The craft of writing is an explosion of thoughts, emotions, inspirations and creativity. Many writers possess extremely similar characteristics. However, writers also have their own unique sense of style and approach. Margaret Atwood and Margaret Laurence are both authors who are known for their stylish and engaging stories. Their personal lives and experiences are similar to an extent, but can also differ significantly. Jean Margaret Wemyss, was born at Neepawa, Manitoba on July 18, 1926. Her mother died when she was four years old. Her father subsequently married his wife's sister, a teacher and librarian. With her encouragement, young Margaret began writing stories at the age of seven. When she was nine, Laurence's father, Robert, died. The family moved into the home of the maternal grandfather. While living with her Grandfather Simpson, Laurence completed her secondary school education in Neepawa and obtained her first writing job as a reporter for the Neepawa Press in the summer of 1943. ...read more.

Margaret Atwood currently lives in Toronto, Ontario. Writers are composed of a plethora of qualities, including one of the most important: the ability to distort clich�s and realities. The most significant part of an author's story is to be inspired by an experience that he\she could relate to. We know that by being able to distort that experience into something creative and compelling, the author has succeeded in fictitious writing. Margaret Laurence has established herself as one of Canada's best literary voices. Laurence did not grow into her love for writing; instead she initially knew she was going to be a novelist. From being the editor of her school paper, to successfully graduating from the University of Winnipeg, Laurence utilized her many experiences to aid her in becoming a famous and extraordinary talent. Laurence had her share of obstacles. For example, numerous churches banned her work because her writing was said to be "unfit reading material". ...read more.

Atwood also grew to become this century's most feminist and near dystopian novelists. She was driven by her sense of social reform and her realistic view of a disrupted society to produce works such as The Handmaid's Tale. Like Laurence, Atwood also utilized her experiences to produce a great story. Laurence and Atwood have both left their marks as great Canadian writers. Their lives and experiences have shown many similarities, but like every great writer they both possess their own distinctive and individual talent. "We write to taste life twice, in the moment and in retrospection". Both these authors have proven this saying correct. Writing serves two basic purposes. One is to tell a fictitious story, the other is to tell a factious story based on an experience that has occurred. Personally, Atwood and Laurence have matched my philosophy of the craft of writing. Their similar yet different styles have still corresponded with their lives and experiences, one of the most crucial aspects of content. Comparative Essay: The works of Margaret Atwood and Margaret Laurence Presented By: Abidah Lalani Presented To: Mrs. Bennett September 23, 2002 EWC 4U1 ...read more.