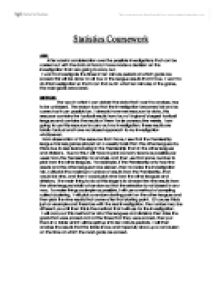 After careful consideration over the possible investigations that can be carried out with the data at hand, I have made a decision on the investigation that I am going to carry out.

After careful consideration over the possible investigations that can be carried out with the data at hand, I have made a decision on the investigation that I am going to carry out.

The way in which I can obtain the data that I want to analyse, has to be unbiased.  The reason is so that the investigation becomes fair and as correct as it can possibly be.  I already have me resource for data, this resource contains the football results from four of England’s largest football leagues and contains the results of them for six consecutive weeks.  I am going to use this resource to carry out my investigation; these results are totally factual and have no biased approach to my investigation whatsoever.

After my first Pilot Study I can see that there is not really a solid enough foundation for me to base any firm prediction on.  Due to this I will need to repeat my pilot study; however I am going to change the length of the study and by this I mean that more results are going to be used and probably over two weeks worth of results rather than just one.  The reason for this is to get more results for me to analyse and then hopefully see any trends and relationships; I can also then gather a sound prediction for the main investigation from more results because I can hopefully see at which time more goals are scored from this new data collection method.  Basically, with this larger collection of data collection I will be able to find out what I am looking for, this would be by being able to see more goals and the times that they are scored, then I can hopefully also see at what times the goals are most likely to be scored, which is my main investigation, and so I will be able to draw up a firm prediction from this.

To get a larger number of results I have taken results from two weeks, these weeks have been picked at random and so week three and week five have been selected.  This is a pilot study and the analysis is what really matters at this stage, and that is why I am not taking much consideration over the selection of data and the way that I am going to collect the data or choose it.  On looking at the football resource I have, I can see that the Premiership fixtures are less than the Division One fixtures.

I have used the certain graphs and charts that I have due to their relevance with the data.  I thought that the graphs and charts would show the relevant data clearly and in the most efficient way, I had many other types of presentation methods which I could use, however I only used the ones that I had because they are more efficient in data presentation.  I have hand drawn a set of pie charts so that I can test my own understanding of how to draw up charts with set data, this has proved successful as I see that I have managed to produce sufficient pie charts to go with the data.