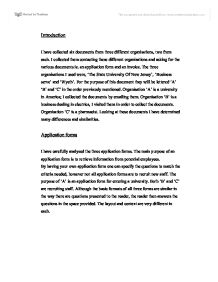 Although ‘A’ is the shortest application form and contains only two pages it looks the most tedious to answer, this is due to the questions being very detailed, making it very time consuming. Another reason being for it would be the American register, which is quite difficult to understand.

In  ‘C’ the beginning of the application forms has more general questions, however at the back are lots of questions specified toward the chemists.

However ‘B’ is slightly less clear. The questions are more detailed but there are no sub headings to tell the applicant what to expect.

Layout of the Forms

The layout of ‘A’ is set in a small font perhaps size 10 which makes it difficult to read. However there are appropriate responses to the applicant. The form included sub headings for each section of questions. ‘A’ in my opinion is too complicated. One has to attach resumes and answered detailed questions, all in all a little too complicated. Perhaps though the layout and style process the purpose of the document. A complicated application form obviously means a difficult position compared with a simple document.

The actual layout of the three invoices are very similar, each with columns all with headings. There are four columns in ‘a’ and ‘b’ whereas in ‘c’ there are five. In each three is a total box with ‘c’ having a simple total compared with the others having three separate total boxes.

Another feature I have noticed was that payment details are present in both ‘a’ and ‘b’, however in ‘c’ there are none mentioned. In my opinion payment details is essential in caseo f any recalling over any payments.

‘b’ contains slightly too many objects on the page including the background image. In document ‘c’ the font is quite difficult to read.

The font is clear in the other two documents with a simple company logo.

‘a’ is undoubtley the clearest of the three documents with the clear font and simpl9istic design, however as i mentioned before I would elaborate on the companies details.