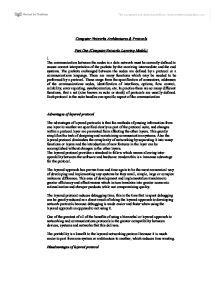 The communication between the nodes in a data network must be correctly defined to ensure correct interpretation of the packets by the receiving intermediate and the end systems. The packets exchanged between the nodes are defined by a protocol or a communications language. There are many functions which may be needed to be performed by a protocol. These range from the specification of connectors, addresses of the communications nodes, identification of interfaces, options, flow control, reliability, error reporting, synchronization, etc. In practice there are so many different functions, that a set (also known as suite or stack) of protocols are usually defined. Each protocol in the suite handles one specific aspect of the communication

The advantages of layered protocols is that the methods of passing information from one layer to another are specified clearly as part of the protocol suite, and changes within a protocol layer are prevented from affecting the other layers. This greatly simplifies the task of designing and maintaining communication systems. Also the layered protocol diminishes the complexity of networking by separating it into many functions or layers and the introduction of new features in the layer can be accomplished without changes in the other layers.
The layered protocol provides a standard to follow which means allowing inter-operability between the software and hardware vendors this is a immense advantage for the protocol.

The layered approach has proven time and time again to be the most economical way of developing and implementing any systems be they small, simple, large or complex makes no difference. This ease of development and implementation translates to greater efficiency and effectiveness which in turn translates into greater economic rationalization and cheaper products while not compromising quality.

iii. Use a diagram to show how a message is passed (physically and logically), using the OSI model between two Application-layer peers that are separated by a single router.

The main ideas about formal correspondence between TCP-IP layers and OSI layers can be easily deducted from the following diagram: 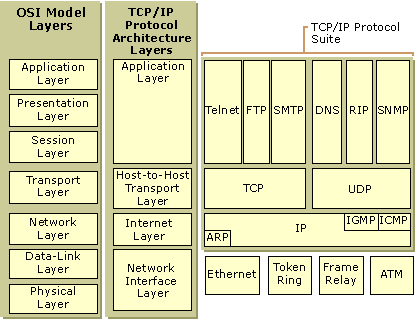 For example, to check your bank account from your computer, a client program in your computer forwards your request to a server program at the bank. That program may forward the request to its own client program that sends a request to a database server at another bank computer to retrieve your account balance. The balance is returned back to the bank data client, which in turn serves it back to the client in your personal computer, which displays the information for you.

Relative to the Internet, your Web browser is a client program that requests services which are the sending of Web pages or files from a Web server which technically is called a Hypertext Transport Protocol or HTTP server in another computer somewhere on the Internet. Another program relationship models is peer-to-peer, with either of two programs able to initiate a transaction.

Advantages of client server are:- 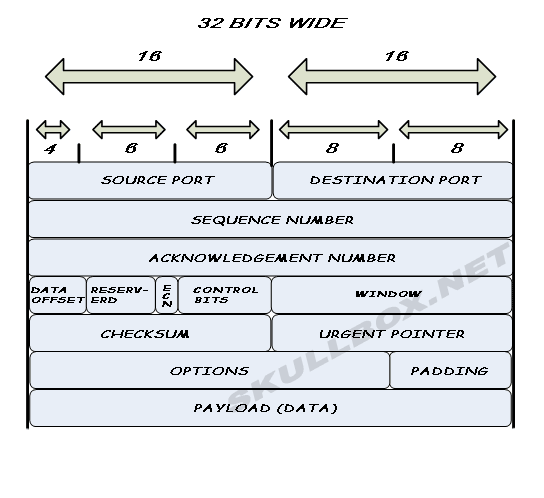 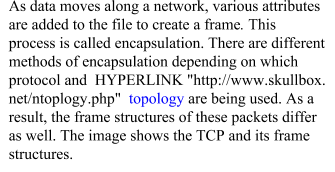 User Datagram Protocol (UDP) is another commonly used protocol on the internet. However, UDP is never used to send important data such as web pages and database information. UDP is commonly used for streaming audio and video devices. Streaming media such as Windows Media audio files (.WMA), Real Player (.RM), and others use UDP because it offers speed. The reason UDP is faster than TCP is because there is no from of flow control or error correction. The data sent over the internet is affected by collisions, and errors will be prevented. UDP is only concerned with speed; this is the main reason why streaming media is not high quality.

TCP uses the window-size to provide both flow control and congestion control. TCP transmits data up to the window size before waiting for the packets; the full bandwidth of the network may not always get used. The limitation caused by window size can be calculated.
At any given time, the window advertised by the receive side of TCP corresponds to the amount of free receive memory it has allocated for this connection. Otherwise it would take the risk to have to drop received packets by lack of space.
Unrelated to the TCP receive window, the sending side should also allocate the same amount of memory as the receive side for good performance. That is because, even after data has been sent on the network, the sending side must hold it in memory until its has been acknowledged as successfully received, just in case it would have to be retransmitted. If the receiver is far away, acknowledgments will take a long time to arrive. If the send memory is small, it can saturate and block emission. A simple computation gives the same optimal send memory size as for the receive memory size given above.

This student written piece of work is one of many that can be found in our University Degree Information Systems section.