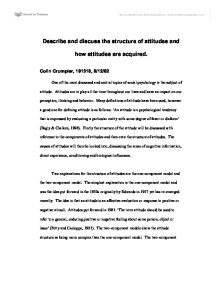 Describe and discuss the structure of attitudes and how attitudes are acquired.

Describe and discuss the structure of attitudes and how attitudes are acquired.

One of the most discussed and central topics of social psychology is the subject of attitude.  Attitudes are in play all the time throughout our lives and have an impact on our perception, thinking and behavior.  Many definitions of attitude have been used, however a good one for defining attitude is as follows: ‘An attitude is a psychological tendency that is expressed by evaluating a particular entity with some degree of favor or disfavor’ (Eagly & Chaiken, 1998).  Firstly the structure of the attitude will be discussed with reference to the components of attitudes and then onto the structure of attitudes.  The causes of attitudes will then be looked into, discussing the areas of cognitive information, direct experience, conditioning and biological influences.

Attitudes can come from many sources, these have been grouped generally into four main areas, which shall be discussed.  The first area to be discussed is how attitudes arise from thoughts and beliefs (cognitive information).   A theory that was formed in the area of cognitive information is the theory of reasoned action (Fishbein & Ajzen, 1975).  This theory put forward that attitudes are formed in part by beliefs already apparent in the mind, these beliefs then influence the evaluation of the object, person or situation to form the attitude.  The beliefs about the stimuli are what we already know about it and the attitudes and views we hold about it as stored in our memory, these beliefs however then may update and change the attitude about the stimuli on future occasions and once more information has been attributed with the stimuli.  A stimulus however may have many different beliefs associated with it that appose each other, and the complex the beliefs about the stimuli the longer it may take to form an attitude about it.

Attitudes can arise from direct experience with the stimuli, and sometimes there is no apparent reason for the positive or negative attitude towards the stimuli.  In an experiment performed by Saegert, Swap and Zajonc (1973)